Both Border States have decided to complete the project within three years. The Punjab government led by Chief Minister Captain Amarinder Singh had been pursuing the matter with the Centre over past several months.

The CM had, in a recent meeting with Nitin Gadkari, Union Minister for Water Resources, River Development and Ganga Rejuvenation, sought early resolution of all issues relating to this project.

The agreement was signed in the presence of Governor Jammu&Kashmir Satya Pal Malik at Srinagar.

This inter-state project was approved by the Centre as a ‘National Project’ in February 2008 at a cost of Rs. 2285.81 crore, including the irrigation component of Rs. 653.97 crore.

Though work on the project started in 2013, it was halted in 2014 due to certain observations raised by the Jammu & Kashmir government. In the meantime, the Punjab Government submitted a revised cost estimate amounting to Rs. 2793.54 crore and requested the Centre to include the project in the prioritized list of PMKSY/AIBP projects.

When implemented, the project will enable the up-stream Ranjit Sagar Dam project power station to act as a peaking station, besides having its own generation capacity of 206 MW and irrigation benefit of 37,173-hectare CCA to Punjab and J&K states.

According to the spokesperson, it will enable the country to fully utilize the Ravi water as per the Indus Water Treaty with Pakistan. Besides delivering power and irrigation benefits to the nation worth Rs. 850 crore annually, it will also prevent Ravi water going waste to Pakistan. 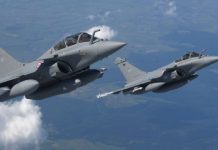