The three main players in Punjab politics – the ruling Congress, the opposition Aam Aadmi Party (AAP) and Shiromani Akali Dal (SAD), traded political barbs against one another in different rallies on Sunday.

All the three parties tried their level best to make their public rallies a show of their strength.

Congress leaders, in their speeches at the Lambi rally, targeted the Akali Dal and particularly the Badal family for the sacrilege incidents in 2015.

SAD leaders in Patiala said that the Congress had failed to deliver on any of the high promises of loan waiver to farmers, eradication of drugs and among others.

Meanwhile AAP held a protest march on Sunday from Kotkapura town to Bargari village in Faridkot district. They protested against incidents of sacrilege of Guru Granth Sahib and the Punjab Police firing in 2015. 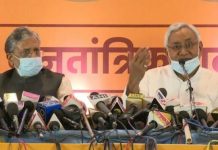