Punjab Chief Minister Captain Amarinder Singh, who was hospitalized after he developed a slight viral fever, was discharged on Thursday morning.

Amarinder has been advised rest as his mild viral fever continues.

The Chief Minister was taken to PGI on Wednesday after he developed fever and complained of slight body ache. The doctors conducted various tests, the reports of which came out normal. However, the PGI doctors had decided to keep him in the hospital overnight. 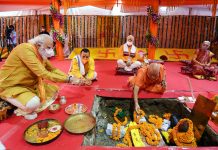