Punjab Police on Tuesday registered 232 FIRs and arrested 111 persons for violation of the curfew imposed by Chief Minister Captain Amarinder Singh in the state to combat the COVID-19 crisis, even as they worked out a comprehensive strategy to ensure doorstep delivery systems and other basic facilities to the people across the state.

While the maximum of 38 FIRs for curfew violation were registered in SAS Nagar (Mohali), 34 were registered in Amritsar (Rural), and 30 each were reported from Tarn Taran and Sangrur, said the DGP, adding that maximum number of 43 persons were arrested from Tarn Taran. While 23 persons had been arrested in Kapurthala, Hoshiarpur reported 15 arrests, followed by Bathinda (13), Ferozepur (5), Patiala (5), Gurdaspur (4) and Ludhiana Rural (2).

The districts which had zero violation of curfew were Khanna, Pathankot, Barnala, CP Ludhiana, Fazilka and Mansa.

Two cases of violation of quarantine restrictions were also reported during the day, disclosed DGP Dinkar Gupta, adding that these were from Sri Muktsar Sahib, which also reported four cases of curfew violation.

As of today, a total of 38,160 police employees in different rank have been deployed on the ground in various Districts / Police Commissionerates of Punjab for enforcement of curfew, including sealing of affected clusters (SBS Nagar District), besides maintenance of essential supplies and law and order. These include 981 volunteers.

Following the detailed curfew guidelines issued by the Chief Minister, the DGP held a meeting of all IG/DIG Ranges and CP/SSPs over Video Conference, along with the senior Management Team of the Punjab Police. The meeting deliberated over systems to be put in place to facilitate the people to get access to essential items, such as milk and foodstuff, medicines, healthcare etc.

The DGP Punjab also exhorted the field police staff to work as missionaries and social workers in such testing times for the citizens. He asked them to raise and deploy a team of about 50-100 policemen to coordinate the maintenance of food and medicines to the people. He further asked them mobilize young citizens as a Volunteer Corps, along with delivery boys to establish a supply line between Kirana shops and consumers to ensure doorstep delivery of food and other essential items.

Gupta suggested that out-of-work auto and taxi drivers could also be deployed as delivery boys to door to door deliveries. Ludhiana, Sangrur and Barnala districts have already put such systems in place. It was also discussed that Rehris and Milk Vans should be allowed to move into colonies, Mohallas and streets for door-to-door deliveries.

The DGP advised the District Police Chiefs to allow the smooth movement of trucks across inter State borders to carry food items into Punjab so that there was no scarcity of essential commodities. He also spoke to Chief Secretary and DGP of Jammu & Kashmir to facilitate the entry into J&K of hundreds of goods trucks stranded at the Madhopur Barrier in Pathankot.

He also took up the cause of Kashmiri students with the senior most officers of J&K who were also stuck in Madhopur because of the decision of the J&K government to put all persons entering J&K into quarantine.

It was also discussed that Highway Petrol Pumps should be allowed to function for the convenience of the commuters on the Highways. Police is devising a system of Stickers as Curfew Passes.

Earlier, in a video message to the members of the Punjab Police, the DGP conveyed the deep appreciation of the Chief Minister for their outstanding work in the villages and streets to provide the much needed support and succour to the citizens of Punjab in these testing times.

DGP Punjab said he was proud of all the members of the force for making Punjab Police one of the best Police forces in the world.

The DGP later said that police personnel in the field were being trained from time to time on the directions received from the government with regard to implementation of curfew and quarantine restrictions. Masks and sanitisers are being distributed among them with the help of NGOs, and all steps were being taken to ensure the wellness of the police personnel, said the DGP. 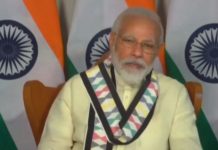