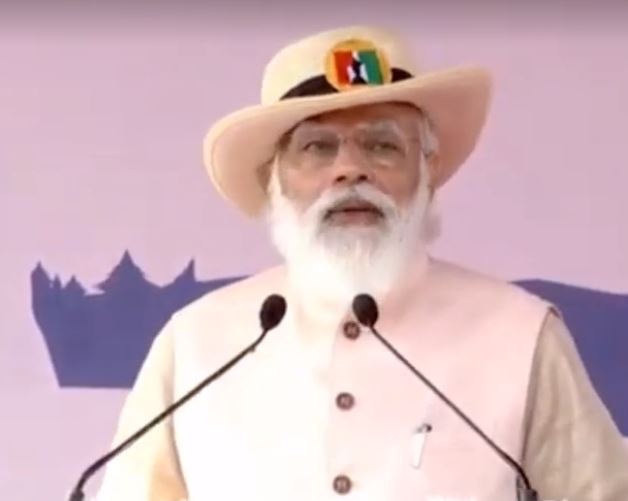 Prime Minister Narendra Modi on Saturday said the truth behind the Pulwama terror attack was revealed after claims made in Pakistan’s parliament.

Speaking at an occasion to mark the birth anniversary of Sardar Patel in Gujarat’s Kevadiya, PM Modi said, “the country can never forget that some people were not saddened at the sacrifice of the security personnel during the Pulwama attack. At that time, these people were only doing politics.”

He lamented the play of ugly politics in the country which displayed utter selfishness and arrogance. Politics done after Pulwama attack is a great example of to what extent can these people go, for their political interest. He urged such political parties to work in the interest of the security of the country and for the morale of our security forces.

“A sense of peace, brotherhood and mutual respect is the true identity of humanity. No one can ever get welfare from terrorism or violence,” said Modi.

He further said nobody had imagined that Covid-19 pandemic would strike, but the country fought with collective strength and will, which is unprecedented in history.

“This Corona pandemic came suddenly. It has affected human life all over the world. But the way the country has proved its collective strength, its collective will to fight against this pandemic is unprecedented.” Modi said.

“We, together 130 crore citizens are building a nation that is both strong and capable. A Nation in which there should be equality, and there are possibilities as well,” Modi said.

“Only a self-sufficient country can be confident of its progress as well as its security. Therefore, the country is moving towards becoming self-sufficient in the field of defense also. Not only this, India’s views and attitudes on borders have also changed,” he added.

The Prime Minister said now Kashmir has moved on a new path of development, leaving behind the obstacles that were coming in the development of Kashmir. He added today the country is establishing new dimensions of unity. He listed the steps taken for the restoration of peace in the Northeast and the initiatives taken for its development.

He said the construction of  Ram Temple in Ayodhya following the Hon’ble Supreme Court’s verdict is an attempt to restore the cultural glory of India envisioned by Sardar Patel.

The Prime Minister said India’s perspective and attitudes towards borders have also changed. Criticizing the neighbouring countries, he said today those eyeing the land of India are getting a befitting reply. He pointed out that India is building hundreds of kilometers of roads, dozens of bridges and many tunnels on the borders. He affirmed that today’s India is fully ready to protect its sovereignty and integrity.