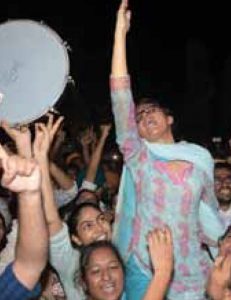 It is a watershed moment because it is for the first time that a girl candidate has become President of Panjab University Students Council. Being product of Panjab University myself, I understand that her election win is very significant as it is symbolic of changing direction in gender equations. Surely, the win would not be confined to PU campus but would have reverberations across the nation. In the process she defeated the candidates of the BJP, the Shiromani Akali Dal, the Indian National Lok Dal and the Congress. Her victory is rebuff to the hitherto male-dominated kakashahi brand of politics in PU. Kanupriya said, “I do not have a moustache to twirl, but by winning the top post, I have shattered few myths.” In her first statement after victory, Kanupriya had asked the vice-chancellor to not interfere with the Student Council’s work.

Kanupriya’s father, Pawan Kumar is a businessman and mother Chandar Sudha Rani is a nurse. Kanupriya has done her schooling from Sacred Heart Convent School, Tarn Taran. She joined the Zoolog Department of Panjab University in 2014 and is currently pursuing her MSc. She won convincingly by getting 2,802 votes against her opponent Rana from the University Institute of Legal Studies getting 2,083 votes.

A candidate of the Students For Society (SFS), a new outfit, Kanupriya won the hearts with her hostel-to-hostel and face to face canvassing. She never misses a chance to raise her voice for gender equality. Little doubt, voters chose her and campaigned for her without falling in the trap of temptations of booze parties, outings and gifts. The fact that she defeated five male candidates who contested with the support of ABVP, Panjab University Students Union (PUSU), Students Organisation of India (SOI), Punjab Students Union and National Students Union of India depicts the changing mood.

The change is an indicator of the emerging women power at the Panjab University where girls despite their numerical majority and achieving excellence in academics and sports had to play second fiddle. Already, Kanupriya has proved it in her maiden act by forcing the authorities to take off the notice pasted in Girls’ Hostel No. 1, which mandated girls to be “properly dressed”.

The controversial notice said, “This is to inform all residents of Girls’ Hostel No. 1 that they should be properly dressed while going to the common room, the dining hall, hostel, or office, failing which it will be considered an offence and fine may be imposed.” Kanupriya, the newly elected president of the PU Students Council asked the girls whether they should tear the notice. She asked the Dean, Students Welfare (Women), Prof Neena Caplash, that no such notice had been put up for teachers or hostel inmates anywhere else. She further questioned: “Why this is being imposed on girl inmates of PU hostels and not in boys’ hostels.”She argued that this only shows the patriarchal mindset of authorities. The Dean then agreed to take the notice off

The PU results are a pointer to better times not to be confused with the rhetoric of “achhe din”. However, a large number of youngsters opting for NOTA in this poll is also an indicator of the mood. Since the Panjab University has been the alma mater of several top political figures including former Prime Minister Dr Manmohan Singh, the parties should take note of the undercurrent against their candidates in this election to the student’s council.

Self-sufficiency in domestic crude: Is it a pipe dream?