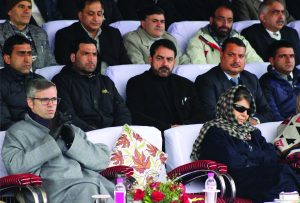 Though the government has let off the People’s Conference leader Sajad Gani Lone, a major leader once seen close to the BJP, he has been put under house arrest. Lone had earlier been put up at the MLA hostel along with other leaders. Similarly Waheed Para, a PDP leader and a close confidant of Mehbooba, is also under house arrest now.

If anything this has meant that the centre is loathe to unrestricted political activity in the Kashmir Valley even six months after the centre stripped J&K of its semi-autonomous status. By keeping top NC and PDP leaders out of circulation, the political activity in the Valley has come to a complete stop. And coupled with the lingering siege and information clampdown, this has created a suffocating environment. A bureaucratic setup headed by Governor Girish Chandler is hardly in a position to generate a sense of political involvement among people that an unhampered democratic activity can do.

Perhaps in acknowledgement of this need, the centre has tried to deploy new acceptable political actors to reach out to people. And spearheading them is the former PDP leader and the prominent J&K industrialist Altaf Bukhari. In recent past, around eight PDP leaders have joined him who were subsequently expelled by their party.

Another leader who has also adopted a pro-New Delhi line is the PDP patron Muzaffar Hussain Beigh. He is not a part of Bukhari-led group but he remains very much a part of the PDP. In his statements so far, Beigh’s has also criticized Mehbooba, the detained PDP president, saying her anti-New Delhi statements were also responsible for withdrawal of Article 370 of Constitution which granted J&K its autonomy.

Interestingly, while the PDP was a quick to expel its eight leaders who allied with Bukhari, no action has been taken against Beigh. That too, even when there is little reason to believe that Mehbooba is in on Beigh’s political capers.

That said, in the absence of established leaders, Bukhari and Beigh’s political activity is drawing a lot of attention. More so that of Bukhari, who has so far not only met Lieutenant Governor Girish Chander Murmu and presented him a memorandum but also looks forward to meeting Prime Minister Narendra Modi and floating his own party. And his activities have the advantage of going unchallenged by other actors, who remain in jail. And considering that the Prime Minister Narendra Modi in his parliament speech accused Abdullah, Omar and Mehbooba of remarks geared to disrupt peace in J&K, their incarceration is certain to be perpetuated.

“Without an opposition, Bukhari and Beigh have a free play in Kashmir,” says a recently released NC leader who didn’t want to be identified. “But their relevance would end the moment established leaders are released”.

However, it is difficult to imagine how the politics of Bukhari and Beigh will resonate with the people in the Valley. More so, when it is about moving on from the demand for reversal of the decision to revoke Article 370. In its place, the new Kashmir politics is about three lesser demands: domicile rights, jobs and restoration of statehood for J&K. But whether it clicks with the people will only be known once the new political actors go about mobilizing
people around them.