We are proud of him and wish him success,” Infosys co-founder Narayana Murthy said in his first comments on the elevation of his son-in-law Rishi Sunak as Britain’s prime minister.

Sunak, 42, on Sunday won the race to lead the Conservative Party and is now set to become Britain’s first prime minister of Indian origin.

“Congratulations to Rishi. We are proud of him and we wish him success,” Murthy said in first first reaction emailed to PTI. “We are confident he will do his best for the people of the United Kingdom.”

The son of a pharmacist mother and doctor father, Sunak was educated at one of England’s most renowned schools, Winchester, and then Oxford. He spent three years at Goldman Sachs Group Inc. and later gained an MBA from Stanford in California, where he met his wife Akshata Murthy, daughter of Infosys co-founder Narayana Murthy.

He married Akshata in 2009 and the couple has two daughters, Krishna and Anoushka.

Supreme Court sets October 18 as deadline to conclude arguments in... 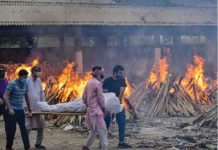