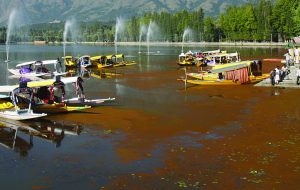 Over the past five months as Kashmir slipped into a paralysis following nullification of Article 370, the state-turned union territory’s environment has suffered no less. One of the hardest hit natural assets has been Dal Lake, Kashmir’s most famous water body, and a magnet for tourists from far and wide.

As the daily cleaning of the lake by the concerned Lakes and Waterways Development Authority came to a halt during the ongoing strife, a thick and a growing coat of algae spread through a wide swathe of the waterbody and threatened to overwhelm it.

The algae, environmental experts say, had been largely controlled in recent years, thanks to a multi-crore rupees clean-up funded by the Government of India. And its resurfacing now points to the deteriorating health of an already stressed lake.

“Basic problem with the conservation plan for the lake is that it is not based on a scientific understanding. It is adhoc ,” says Shakeel Ramshoo, the professor and the head of the department of Earth Sciences at Kashmir University. “We have only been treating the symptoms, not addressing the root cause”.

Dal has been the focus of an intense recovery effort over the past three decades. The state and the central governments have followed twin strategies of conservation and the rehabilitation to rejuvenate the lake’s ecosystem and to rid it of the encroachment respectively. The plan called The Dal-Nigeen Lake Conservation Project was drawn up in 2005.

Though conservation effort funded by the Union Ministry of Environment and Forests has somehow pulled along, it has largely made a symptomatic difference to the condition of the lake. And the state government financed rehabilitation plan which includes removing encroachment and resettling the people living inside the Dal hasn’t made much of a headway, even though the plan dates back to 1987. Around 50,000 people live in 58 hamlets within the lake and around 750 houseboats are moored in its waters.

As return of the algae makes it clear, the factors that menace the eco-system of the lake haven’t gone away and in the absence of cleaning by the concerned Lakes and Waterways Development Authority during the ongoing strife, returned with a vengeance.

The basic threat to Dal’s survival, according to environmental experts, springs from its altered watershed over the past several decades. The lake’s once large green belt has suffered an inexorable encroachment in parts. New residential colonies have sprung on the lake’s west and the existing colonies have become more congested including the hamlets inside Dal, together with the massive tourism related infrastructure along its 15.5 kilometre long Boulevard. And all the sewage and the agricultural effluents from a predominant part of these settlements empty into the lake including human excreta, from the houseboats.

Before the Government installed Sewage Treatment Plants around five years ago, the LAWDA figures estimated that 5.5 tonnes of phosphorous and 88.9 tonnes of nitrogen drained into the Dal each year from human settlements and farms inside and on the banks of the lake. The consequent influx of the nutrients, mostly nitrogen and phosphorus and their settling down at the lake bottom, acts as a super-fertilizer which encourages an indiscriminate growth of weeds. According to a study by environmental experts M R D Kundangar and Adnan Abubakr, this has caused drastic changes in the water quality over the years, reducing its transparency by a dramatic 70 percent.

But to its credit, Government has been working to an elaborate conservation plan to rescue Dal. The LAWDA has already set up Sewage Treatment Plants to treat the 36.7 million litres per day of run-off into the lake. The Authority has also installed mini Sewage Treatment Plants to treat the sewage from the houseboats. There is also a plan to build around 28 kilometres long sewers along periphery of the lake to intercept the inflow. The government also proposes to re-align the houseboats “to connect their outfalls with sewer system”. About 10,000 cubic meter of the solid waste is collected annually by the NGOs and disposed off by the Srinagar Municipality.

But as the lake’s existing condition reveals, the conservation efforts are far from making a redeeming difference. More so, when recurrent turmoil in the UT puts an extended halt to it.

Cornered, BJP may shift political narrative ahead of polls in 9... 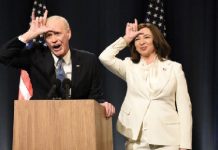