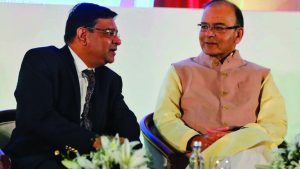 For the first time, most of the institutions in the country are up in arms against the political leadership. They want freedom from political interference. If the director of top investigating agency of the country, the CBI has come to the Supreme Court to allege that the people at the top wanted investigations to take to a desired direction, the RBI is issuing warning that infringement in its autonomy will jeopardise the monetary situation. While CBI director Alok Verma was upset over interferences in important cases, the RBI is unhappy over government attempt to grab its surplus money to finance populist programs ahead of 2019 elections.

Other institutions too are feeling suffocated. The Central Information Commissioner is complaining of suppression of information illegally and non-cooperation on the part of government and the Election Commission of India is being accused of taking decisions that are favorable to the government. The impartiality of ECI is being suspected.

No one had anticipated that the CBI would be raided and a midnight coup conducted. But it was far from being an unexpected incident. It was the result of a situation that was brewing for many years now. The manner in which the midnight coup was effected clearly indicates that a clique has come into existence at the top level of the government to command institutions without any legal sanction.

The Supreme Court wanted to stem the rot in CBI as early as in 1990s and gave CVC power to supervise its investigations. However, the Court was forced to term the organisation as a ‘caged parrot’. Over the years, the political interference increased and became overt from discreet and covert ones. There were also chances of these operations being questioned at one or another level. The investigations into 2G and coal scam clearly show that corruptions hardly had organized support. That is why contradictions could be unearthed and many bigwigs were brought to book.

The war in CBI only shows that entire structure of investigative mechanism was attacked to effectively turn the organisation into a real “caged parrot”. The Supreme Court had put in place a mechanism to ensure the integrity of it. The Court made compulsory two-year tenure for the post of CBI director. Within this tenure, he could not be transferred. In order to circumvent the directive, the government sent the CBI director on an indefinite leave. The allegations and counter allegation made by senior officers of the agency reveals that the CVC itself was embroiled in the internal war of CBI. The CVC chief’s impartiality has been under cloud. He himself was facing allegations of corruptions at the time of his selection to the post. A petition was also filed against his selection to challenge procedures adopted in it.

The petition filed by DIG of CBI MK Sinha in the Supreme Court against his transfer to Nagpur alleges that the CVC chief has been siding with Special Director Rakesh Asthana, the key player in the civil war in CBI. According to it, both of them enjoy a good relationship with each other. Asthana himself was made special director despite the opposition from the CBI which was investigating charges of corruption against him at the time of his selection.

Most astonishing of the allegations is against a junior minister of Modi cabinet, Haribhai Chaudhary. In his complaint, MK Sinha has accused him of bribery. The allegations and counter allegations put important institutions like PMO, Research and Analysis Wing, Intelligence Bureau, CVC and National Security Advisor in dock. According to them, the midnight coup was affected under the direct supervision of NSA Ajit Doval and Department of Personnel actively supported him.

Chief Information Commissioner Acharyulu complains of PMO’s non-cooperation in giving information that it owes to the common people. He had ordered to give details of the action taken on a letter from then Reserve Bank Governor Raghuram Rajan asking for action against willful defaulters of public sector banks. He has also ordered Reserve Bank of India to provide details on these defaulters. Acharyulu is upset over the attitude of both the institutions that have chosen not to provide the information. He has even approached Parliamentary Panel to regulate the mechanism of providing vital information on finance and economy by the RBI.

Chief information Commissioner’s insistence on execution of his orders has its own implications. The government chose not to paralyze the organization by not providing enough manpower. According to the reports four commissioners will retire soon and the CIC will have only tree commissioners against its strength of 11. Four commissioners are retiring but no one has been appointed in their place. The CIC has now pendency of 25000 cases. It will soon have thousands more.

The Election Commission has been under a cloud over functioning of EVM machines and announcement of election dates. The Commission has also failed to take actions against violations of code of conduct and failed to devise mechanism for curbing money power. It also could not take action against paid news.

How institutions were ignored can be seen in demonetization of notes of 500 and 2,000. No proper consultations were made and the move resulted in large scale displacement of informal economy. It created virtual anarchy in the sector. The economy became more centralised. The outcome was almost zero as 99 per cent of the money came back into the system. People with black money escaped and those who had hard-earned money had to face immense hardship.

A close look at the process of destruction of institutions suggests that it has lot to do with the changes in the polity. The process is intricately related to political, social and economic changes in the country. The governance under Modi rule has become centralised to the extent that even senior ministers do not have say in important decisions. Most of the decisions are taken by Prime Minister Narendra Modi and BJP president Amit Shah. Involvement of National Security Advisor Ajit Doval has been seen in many vital decisions of the government. When it came to dump Mehbooba Mufti led PDP, Doval played vital role in deciding the matter.

The controversy surrounding Rafale deal has its roots in the decision making process. Rahul Gandhi alleges that the deal was done without the approval of the Cabinet Committee on Security. The Modi government is yet to respond to this specific question. If the allegation is true, it only reveals the extent of decline in the institutional mechanism. Ito shows that the institution at the top is also not immune to manipulations.

Recently, the governor of Jammu and Kashmir dissolved the assembly to block an opposition government. The institution of governor has been in controversy for long. However, the J&K governor added to the continuing controversy by saying that the parties that were coming together had no common ideology. According to the Supreme Court ruling in famous SR Bommai case, the governor has not to decide on the claim to form a ministry. The majority is to be tested on the floor of the assembly. Here, the governor not only acted unconstitutionally but also tried to malign the political parties by accusing them of indulging in “horse trading”.

The recent decline of institutions could be linked to the growing percentage of black money in the country’s GDP. Noted economist Arun Kumar said that increased circulation of black money has raised corruption. Corrupt bureaucrats hardly care for institutional integrity.

Expansion of private economy has caused an unprecedented increase in corruption. Anyone can see the rise in number of scams since 1991, when new economic policy was launched. Most of the scams have their roots in crony capitalism. The favourites get everything and people without connection get nothing. This could only be done when institutions are prone to manipulations. The conversion of Planning Commission into NITI Aayog was perhaps first incident which showed that the country is going to be run at the wishes of corporates. This is essential for the government to resort to falsehood to divert people’s attention from real issues. How could anyone expect institutions to protect their integrity in the age of post-truth?