A rally by Pro Khalistan group, Sikhs For Justice (SFJ) outside the Indian Embassy in Washington on the occasion of the Republic Day turned out to be a flop show.

According to the sources, the demonstration by SFJ was attended by around 15-20 people, who were outnumbered by Indian-Americans waving Indian flags.

The protesters raised “Khalistan zindabaad” slogans and had planned that they would be burning the Indian flag outside the Embassy.

However, sources claimed that no flags were burnt at the event.

The local Sikh community slammed the SFJ for the protest. 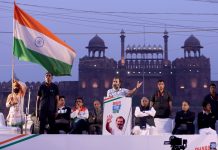 Now, a twist in the Pappu story