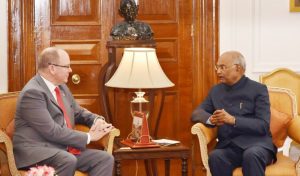 Welcoming Prince Albert to India, Kovind said that India and Monaco have always enjoyed a relationship of trust, friendship and mutually beneficial cooperation. The current visit imparts a strong impetus towards taking the relationship to newer heights.

The President said that India-Monaco ties are doing well. However, there is scope to do a lot more together.

On issues such as renewable energy, climate change and the environment, Kovind said, “there is a strong meeting of minds between us. We must prioritise these areas for bilateral cooperation.”

Later, President Kovind hosted a lunch for the Prince and his accompanying delegation.