Prime Minister Narendra Modi on Monday morning left for Russia to meet Russian President Vladimir Putin in the city of Sochi for an informal summit. The meeting between the two leaders is the first since the re-election of Putin as the President of Russia.

“PM Narendra modi off to an early start to Sochi in Russia for the Informal Summit with the Russian President Putin. The two leaders are expected to discuss steps to cement our already solid partnership over several meetings in the course of the day” MEA tweeted.

Prior to his visit to Russia, PM Modi in a series of tweets — in Russian and then in English said, “Greetings to the friendly people of Russia. I look forward to my visit to Sochi tomorrow and my meeting with President Putin. It is always a pleasure to meet him,” Modi tweeted.

“Am confident the talks with President Putin will further strengthen the Special and Privileged Strategic Partnership between India and Russia,” he said in another tweet.

According to Russian news agency, “There are plans to discuss key issues developing Russian-Indian very privileged strategic partnership and also to exchange views on vital issues of the international and regional agenda.”

The Indian envoy to Russia Pankaj Saran, said “We expect them to be together for a few hours. It is a great opportunity to discuss different issues.” Later this year President Putin will travel to India for a summit. “This frequency of meetings is just another important aspect of our relationship with Russia,” he said. “Iran is a very important subject and I am sure, it will come up for discussion between the two leaders as they both share relations with Iran and have stakes in that country,” Saran added. On terrorism, the envoy said “Russia has also been a victim and is concerned about the spread of terrorism within its own country. The threat that the Islamic State poses will also be taken up.” 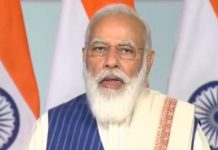 It’s time for tech-solutions that are Designed in India but Deployed...