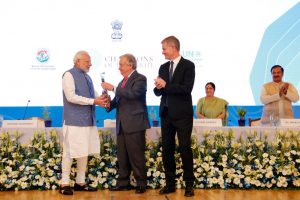 After receiving the award Narendra Modi thanked the world community for acknowledging India’s effort to save environment.
He dedicated the award to the country and its long tradition of co-existing with nature. He Further said that it is a proud moment for India to host such an event.

Antonio Guterres said PM Narendra Modi recognised the fact that climate change poses a direct existential threat to us. Guterres thank India for setting an example and he was happy to present the Champions of the earth award to PM Modi.

“The world needs bold leadership on #climateaction. I thank India for setting an example and was pleased to present Prime Minister @narendramodi with the Champions of the Earth Award,” Guterres tweeted.

PM Modi was conferred the award on September 26 by the United Nations (UN) on the sidelines of 73rd UN General Assembly in New York City.

PMO said, “PM @narendramodi getting the @UN ‘Champions of the Earth Award’ is a fitting recognition of his leadership towards making our world a cleaner place. He was firm that the agreement in Paris has to stay and the world must come together.”

“As Prime Minister, Shri @narendramodi has taken numerous steps for the protection of the environment and has always believed that we can conserve our environment and move on the path of development,” PMO added.

Modi and French President Emmanuel Macron were jointly awarded in the ‘Policy Leadership Category’ for their pioneering work in championing the International Solar Alliance and new areas of levels of cooperation on environmental action.