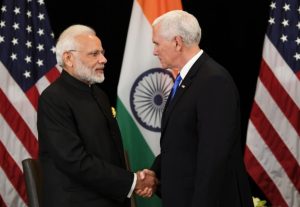 He met US vice president Mike Pence on the sidelines of the East Asia Summit and two leaders discussed bilateral relations, regional and international issues.

Vice president Pence acknowledged that India had made progress economically and felt that India is a positive factor in regional and international relations, the foreign ministry said.

“PM @narendramodi had a warm meeting with @VP of United States Michael Pence in #Singapore. Productive discussion on all aspects of global strategic partnership based on growing convergence of interests on regional and global issues,” Ministry of External Affairs Raveesh Kumar tweeted.

The meeting between Prime Minister Modii and Vice President Pence comes weeks after US president Donald Trump turned down Modi’s invite to India’s Republic Day as chief guest due to “scheduling constraints”.

Modi began his day by attending the Singapore Fintech Summit where he urged start-ups to invest in India. “I say this to all the fintech companies and start-ups, India is your best destination,” he said.

Prime Minister Modi is the first head of government to deliver the keynote address at the event, one of the largest events on financial technology.

Modi will also attend the 13th East Asia Summit (EAS) hosted by Singapore as the current chair of ASEAN grouping.

Before leaving for Singapore, Prime Minister Modi had said in New Delhi that his participation in the ASEAN-India and East Asia summits symbolised India’s “continued commitment” to strengthen its engagement with ASEAN members and with the wider Indo-Pacific region. 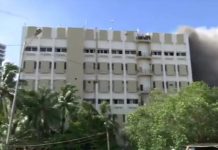 Mumbai: Fire Breaks Out at MTNL building in Bandra, around 100...