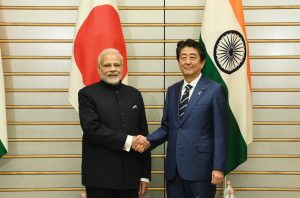  Prime Minister Narendra Modi who arrived in Japan on Saturday to attend the 13th India-Japan annual summit, interacted with the Indian Community in Tokyo on Monday.

“A rousing welcome by the business community from India and Japan! PM @narendramodi arrives at the Business Symposium on “Make in India, Digital Partnership and India-Japan Partnership in Africa,” Ministry of External Affairs Spokesperson Raveesh Kumar tweeted.

Modi thanked the Japanese Prime Minister Shinzo Abe and Japanese people for the warm hospitality and extended warm Diwali greetings to the Indian community in Japan.

Terming the Indian community as ambassadors of India in Japan, Prime Minister urged them to invest in India and to maintain cultural ties with the motherland.

Prime Minister highlighted the achievements of the Government in the last four years and said that India is continuously working with the spirit of Indian Solutions- Global Applications. He said that India’s model of financial inclusion, especially JAM (Jan Dhan Yojana, Mobile, Aadhar) trinity and digital transaction model, is now appreciated all over the world.

“India’s hugely successful space program and robust digital infrastructure was being built in India. Adding to it, ‘Make in India’ program is making India a Global Hub for Electronics and Automobile Manufacturing,” Modi said.

Modi explained how the Union Government is focused on improving ease of doing business and ease of living for the citizens. He expressed happiness at the large presence of Japanese companies in India.

Modi emphasized on the Japanese contribution in creating smart infrastructure for building a ‘New India’. He urged the Indian community to strive hard to continuously improve the relations between India and Japan.

“Both countries would look to develop stronger development partnerships in other parts of the world, including the Indo Pacific, South Asia and Africa,” Modi added.