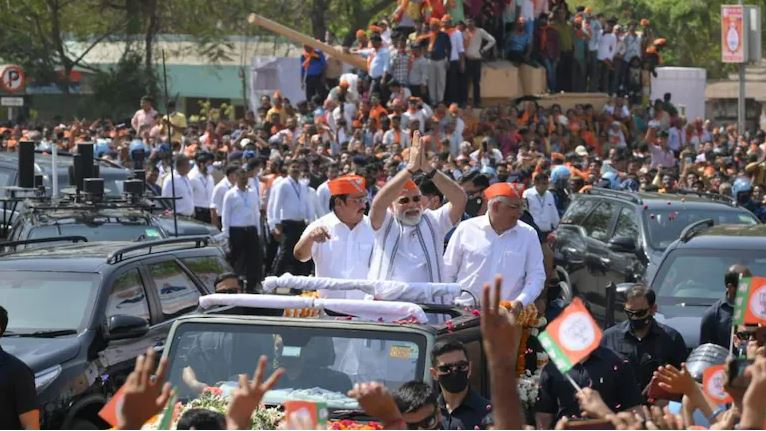 Prime Minister Narendra Modi, who is on a Gujarat visit, on Saturday held a roadshow in Gandhinagar, his second such event in the state in two days.

The roadshow was conducted between Dehgam town in Gandhinagar district and the Rashtriya Raksha University (RRU) at Lavad village, wherein Modi waved to people standing in large numbers on both sides of the road.

Before the roadshow, Modi had left the Raj Bhavan here in a car and shifted to an open jeep on reaching Dehgam. Gujarat Chief Minister Bhupendra Patel accompanied him in the open jeep.

People thronged to greet the prime minister along the 12-km route of the roadshow. They welcomed him with garlands and flower petals. The roadshow ended when the vehicle reached the RRU.

This is Modi’s second roadshow in his home state for the second consecutive day. On Friday, he had held a roadshow from the Ahmedabad airport to Kamalam, the BJP headquarters in Gandhinagar.

These roadshows are being seen as Modi kickstarting his party’s campaign for the Gujarat Assembly elections scheduled in December.

Modi, who began his two-day visit to Gujarat on Friday, will address the first convocation event of the RRU. In the evening, he will inaugurate Khel Mahakumbh, a sporting event.

Modi’s visit to his home state came a day after the BJP registered a resounding victory in the assembly polls in four states, including in Uttar Pradesh.

Assembly elections in Gujarat are scheduled to be held in December. The BJP is facing the challenge of retaining power in the state. 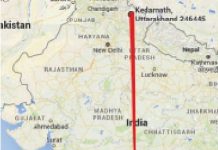