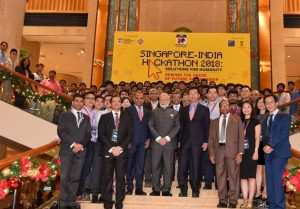 Prime Minister Narendra Modi on Thursday felicitated the six winning teams, including three from India, of the first India-Singapore Hackathon, a platform for the youth of the two countries to harness and showcase their innovations.

The top six teams, three each from India and Singapore, participated in a 36-hour Hackathon Grande Finale in Singapore.

“PM Narendra Modi met and felicitated the winning teams of India Singapore Hackathon, agreed to during the visit of PM to Singapore in June 2018,” Ministry of External Affairs spokesman Raveesh Kumar tweeted.

“Happy to have met innovators who won prizes in the first ever Singapore-India Hackathon. They talked about their extensive work. I was impressed by their passion and commitment towards solving problems our world faces,”Modi said.

The teams were chosen after a final pitching session. A first prize of SGD 10,000, a second prize of SGD 6,000 and a third prize of SGD 4,000 was announced for each of the three winners from India and Singapore.

Among the winning teams from Singapore were Nanyang Technological University (NTU) and the Singapore University of Technology and Design (SUTD), it said in a statement.

“Platforms like the Singapore-India Hackathon serve as excellent opportunities for our youngsters to showcase their work. They also serve as forums to learn about pioneering innovations by youngsters from other nations and institutes. A win-win for our students!” Modi said.

Twenty teams each from both countries comprising university and college students were selected for the Hackathon. Each of these teams had three students and one dedicated mentor.

“Spent time with NCC cadets, who got the opportunity to come to Singapore as a part of a cadet exchange programme. They shared their memorable learnings and experiences with me,” Modi said.

Overconfidence kills the cat, but not always