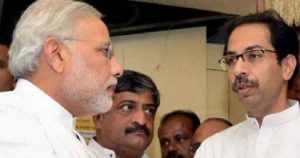 Prime Minister Narendra Modi and newly elected Maharashtra Chief Minister Uddhav Thackeray shared brotherly ties and the former should cooperate with his younger brother who has taken charge of the state, the Shiv Sena has said.

The Sena made the comments in its mouthpiece ‘Saamana’.

PM Modi had congratulated Uddhav Thackeray after he was sworn in as the Chief Minister of Maharashtra along with six ministers.

“Congratulations to Uddhav Thackeray Ji on taking oath as the CM of Maharashtra. I am confident he will work diligently for the bright future of Maharashtra,” PM Modi tweeted.

The relations between the Shiv Sena and the BJP turned sour over equal share in power including rotational chief ministership in Maharashtra.

The Sena maintained that the prime minister did not belong to any single party, but the entire country.

The BJP had emerged as the single-largest party with 105 seats in the Maharashtra assembly election last month.