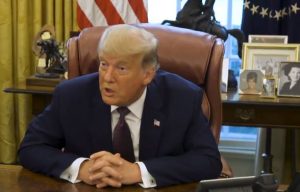 US President Donald Trump on Friday announced that Israel and Bahrain have reached a landmark deal to establish full diplomatic relations. The second such agreement between Israel and an Arab nation in less than one month.

“Israel and Bahrain have committed to begin the exchange of embassies and ambassadors, start direct flights between their countries, and launch cooperation initiatives across a broad range of sectors. This peace deal is a significant step forward for both Israel and Bahrain. It further enhances their security while creating opportunities for them to deepen their economic ties. This deal comes on the heels of the historic normalization agreement between Israel and the United Arab Emirates. The United Arab Emirates and Bahrain are the first Arab nations to normalize relations with Israel in more than 25 years. The United States will continue to support the people of Bahrain as they work to counter-terrorism and extremism, develop economically, and build new peaceful partnerships across the region,” White House said in a statement.

What President Trump said on the deal

“Thank you very much. Just a few moments ago, I hosted a historic call between Prime Minister Benjamin Netanyahu of Israel and King Hamad Al Khalifa of Bahrain. Both leaders expressed their condolences as well to the American people on this very, very tragic, horrible event that took place on September 11th. And they very much meant it. I want to thank them for that.

There’s no more powerful response to the hatred that spawned 9/11 than the agreement that we’re about to tell you. You will hear something today that’s, I think, very, very important for not only the Middle East but for the world.

In the spirit of peace and cooperation, both leaders also agreed that Bahrain will fully normalize its diplomatic relations with Israel. They will exchange embassies and ambassadors, begin direct flights between their countries, and launch cooperation initiatives across a broad range of sectors, including health, business, technology, education, security, and agriculture. This is a truly historic day.

There have been two peace agreements with Israel in the last 72 years. This is now the second peace agreement that we have announced in the last month, and I am very hopeful that there will be more to follow. I can tell you there’s tremendous enthusiasm on behalf of other countries to also join. And we think, ultimately, you’ll have most countries join, and you’re going to have the Palestinians in a very good position. They want to come in — they’re going to want to come in because all of their friends are in. But we have tremendous enthusiasm for coming into the deal.

I want to thank the group of very talented people behind me, and you’re going to be hearing from them in a second. But it’s just a very historic day, a very important day, and so interesting that it’s on 9/11. It’s such a great time. We didn’t know this was going to happen in terms of the timing, but it did happen, and we’re very honored by it.

When I took office, the Middle East was in a state of absolute chaos. I’ve restored trust with our regional partners, and together we’ve eliminated the ISIS caliphate 100 percent; isolated the radicals who pervert Islam and sow instability. Today, nations across the region and throughout the world are joining together, united in their determination to build a better future, free from the evils which perpetuate terror. And I think you see that. I think you see that happening very, very strongly.

I also spoke with King Salman of Saudi Arabia, and we talked about this, and he is — he’s a great gentleman. And what they’ve done in terms of fighting terror is a much different ballgame than it was before we attained this office. The fact is that Saudi Arabia was doing things that they’re not doing anymore, and so are other countries and neighbors. They are doing things that they just would never have done. Their levels and their — all of the things — all of the many, many elements of fighting and hate, they seem to be evaporating. And we’ll find out very soon. But they seem to be evaporating.

So things are happening in the Middle East that nobody thought was even possible to think about, and that’s what’s going on right now. Bahrain has agreed to join Israel and the United Arab Emirates for — and, by the way, I want to thank Mohammed, who’s a great leader, a truly great leader — at the White House on Tuesday. So they’ll be here on Tuesday for the signing of the Abraham Accords. The significance of the signing will be elevated from an already historic breakthrough to one representing a previously unthinkable regional transformation. And that’s exactly what it is. It’s unthinkable that this could happen, and so fast.

And, as you know, when we did the original signing with — and which will actually take place in terms of official on Tuesday — United Arab Emirates, people thought that was amazing. And now they’re hearing this, and they’re also hearing from other countries because they understand that other countries want to very much come in.

On this occasion, I want to thank the leaders of Israel and Bahrain for their vision and courage to forge this historic agreement. Their leadership is proving that the future can be filled with hope and does not need to be predetermined by conflicts of the past. You know all about the conflicts of the past; they’re very legendary. There was a lot of problems going on, but we’ve been able to work things out to a level that nobody thought possible. This is really something very special — very, very special.

As more countries normalize relations with Israel — which will happen quite quickly, we believe — the region will become more and more stable, secure, and prosperous.

In the meantime, we’re pulling most of our soldiers out. So we’re doing it the opposite way. They were doing it with nothing but fighting and blood all over the place. The sand was loaded up with blood. And now you’re going to see that a lot of that sand is going to be loaded up with peace.

The United States will continue to stand with the people of the region and work with them, and build a brighter and much more hopeful future.

So we’re very proud of this. And as time goes by, I think you’ll see more and more why. I think most of you realize how important it is. Even the New York Times, who was very generous in their praise of the original deal, and they never thought — I think nobody thought this was going to happen so quickly after the first.

But they’ll both be here on Tuesday. They’re going to be signing. Benjamin Netanyahu will be here. The Prime Minister will be here — Israel. And we look forward to that.” 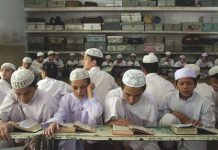