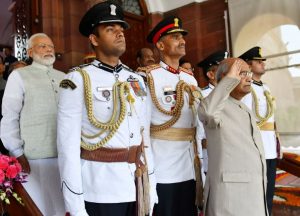 President Ram Nath Kovind on Thursday addressed a joint sitting of both the houses of Parliament in the historic Central Hall,

“I am pleased to address the first joint sitting of Parliament after the election of the 17th Lok Sabha, in the year commemorating the 150th birth anniversary of Mahatma Gandhi. I extend my heartiest congratulations to all newly elected Members of this Lok Sabha,” Kovind said.

“More than 61 crore voters of the country set a new record by casting their votes and enhanced the credibility of India’s democracy in the world. People have stood in long queues braving extreme heat to cast their votes. This time, as compared to previous elections, more women have cast their votes and their participation has been almost equal to men. Crores of youth have voted for the first time and played an important role in shaping India’s future. All voters deserve to be congratulated for the success of this election,” Kovind added.

Kovind conveyed his best wishes to the new Speaker of the Lok Sabha for this new responsibility.

He also congratulated the entire team of the Election Commission for successful completion of the world’s largest election. “The contribution of employees of several administrative departments and various institutions, as well as the security forces in successful conduct of the electoral process is extremely praiseworthy,” Kovind said.

“Nearly half of the MPs in this Lok Sabha have been elected for the first time. The election of 78 women MPs which is the highest number in the history of Lok Sabha, presents the picture of a New India,” Kovind added.

Kovind said, a decision has been taken to increase the income support to farmers who are our Annadaata, by extending the coverage under ‘Pradhan Mantri Kisan Samman Nidhi’, to every farmer in the country and the amount of scholarship under the ‘National Defence Fund’ has been increased for the children of our brave soldiers. For the first time, sons and daughters of the State police personnel have also been included in this scholarship.

“Through ‘Pradhan Mantri Kisan Samman Nidhi’, an amount of Rs 12,000 crore has been disbursed to the farmers in just three months. An estimated expenditure of Rs. 90,000 crore is likely to be incurred annually on this scheme since every farmer has now been brought in its ambit,” he added.

President Kovind also outlined the government’s goals over the next five years as he discussed issues such as Triple Talaq, Nikah Halala, NRC, surgical strikes and One Nation, One Election.

Kovind said, Space technology has helped us in further strengthening our security at land, air and water. Our expertise in accurate weather forecast has improved. This was evidenced during the recent ‘Cyclone Phani‘that struck the eastern coast of the country. Due to accurate information and timely preparation, large scale destruction to life and property was averted.

He further said, “India is marching forward to assume a leadership role in unravelling and comprehending the mysteries of space. Our scientists are involved in the preparations for the launch of ‘Chandrayaan-2’, which will be India’s first spacecraft to reach the Moon. We are also making rapid progress towards achieving the goal of sending the first Indian in India’s own ‘Gaganyaan’ by 2022.”

Kovind said, “All of us have to move ahead with the resolve to realise the idea of New India by the year 2022 when we celebrate the 75th anniversary of India’s independence.”

Thus, in the New India in the 75th year of its independence:

– Farmers’ income will be doubled;

– Every poor will have a pucca roof over his head;

– Every poor will have electricity connection;

– No poor will be compelled to defecate in the open;

– Every village in the country will be connected by roads;

– In collaboration with States, India will be close to becoming a $ 5 trillion economy;

– We will be progressing towards joining world’s three largest economies;

– An Indian will unfurl the tri-colour in space, entirely on the strength of indigenous resources;

– We will provide leadership to global development with a new zeal and confidence.

“I urge you all to dedicate yourselves in the task of building a New India and to discharge your duties with utmost sincerity over the next five years.” Kovind added.