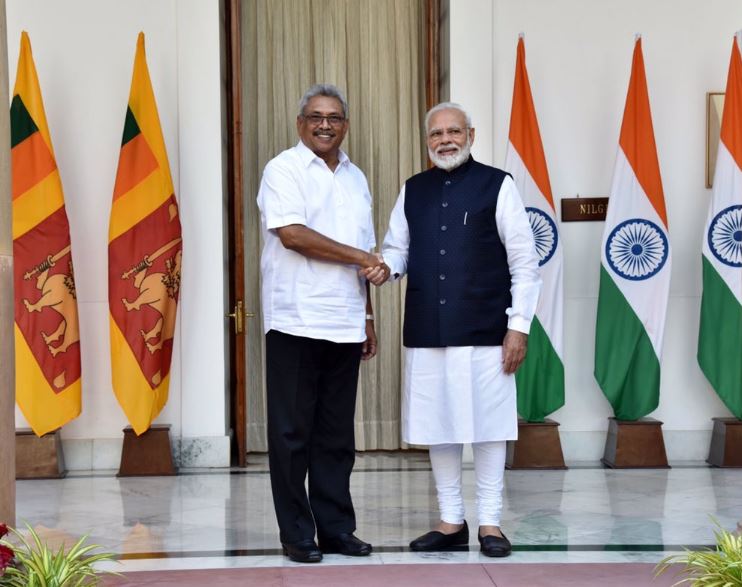 Prime Minister Narendra Modi on Friday said that the visit of newly elected Sri Lankan President Gotabaya Rajapaksa will help strengthen the bonds between the two countries and energise the partnership.

“Happy to receive @GotabayaR on his first overseas visit as the President of Sri Lanka. His visit is a testimony to the time-tested ties between India and Sri Lanka and will help strengthen our bonds as well as energise our partnership,” PM Modi said in a tweet.

Ministry of External Affairs spokesperson Raveesh Kumar earlier in a tweet said, “A new chapter in our 2500 years old intertwined history. PM @narendramodi welcomed President @GotabayaR ahead of their talks. President @GotabayaR’s is on his maiden visit to India in his capacity as President of Sri Lanka.”

“Rolling out the red carpet A 21-gun salute welcomed the Sri Lankan President @GotabayaR as he was greeted by #PresidentKovind & PM @narendramodi during the ceremonial welcome at the forecourt of Rashtrapati Bhavan,” Kumar added.

“I am greatly honored by the warm reception and the hand of friendship extended by His Excellencies @narendramodi and @rashtrapatibhvn and look forward to reciprocating the hospitality soon in #LKA,” Rajapaksa tweeted.

This is Rajapaksa’s first overseas visit since assuming office.