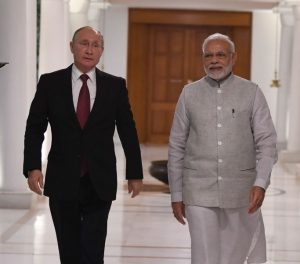 President Putin expressed his deep condolences on the Pulwama terrorist attack. He also conveyed solidarity of the people of the Russian Federation with the people of India in the fight against terrorism.

PM Modi thanked President Putin for Russia’s steadfast support for India’s efforts to protect its interests against cross-border terror attacks and renewed India’s commitment to strengthening bilateral cooperation in countering terrorism as a pillar of privileged and special strategic partnership. Both leaders agreed that the concerned should stop all support to terrorism.

Both the leaders also agreed that the growing cooperation between the two countries will take their Special and Privileged Strategic Partnership from strength to strength.

President Putin reiterated the invitation to PM Modi to attend the Eastern Economic Forum in Vladivostok later this year.

Modi welcomed the invitation and underscored the significance of growing economic cooperation, including in the Russian Far East, between the two countries.