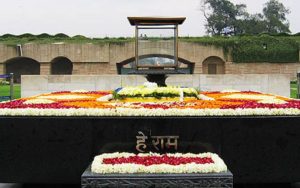 The day also marks the launch of 150th-anniversary celebrations of Father of Nation -Mahatma Gandhi.

The Prime Minister said it is a great opportunity for all of us to come together and fulfil Mahatma Gandhi’s dreams.

“From today, we are entering Pujya Bapu’s 150th anniversary year. It is a wonderful opportunity for all of us to come together and fulfill his dreams,” Modi tweeted.

Later in the day, Modi will inaugurate the first Assembly of the International Solar Alliance at Vigyan Bhawan. The same event will also mark the inauguration of the second IORA Renewable Energy Ministerial Meeting, and the 2nd Global RE-Invest (Renewable Energy Investors’ Meet and Expo).

The Congress President was among the first of the senior leaders to pay homage to Mahatma Gandhi at his iconic memorial this morning.

“Gandhiji is not an immobile statue, he is a living set of ideas and values flowing through India. Truth and non-violence, which he lived for and was killed for are the foundation of our country. True  patriots must protect them,” Rahul Gandhi tweeted.