President Ram Nath Kovind on Friday arrived at Dharamshala in Himachal Pradesh on a two-day visit to the state.

Security has been tightened in view of the President’s visit with paragliding, flying of drones and hot air balloons being prohibited in Lahaul-Spiti and Kullu districts on June 11 when he is scheduled to visit Atal Tunnel Rohtang.

The President will preside over the sixth convocation of the central university in Dharamshala in Kangra district in the evening.

He will visit Atal Tunnel Rohtang, which connects Kullu and Lahaul-Spiti districts, on Saturday. The prestigious tunnel was inaugurated by Prime Minister Narendra Modi on October 3, 2020.

Flying of drones, hot air balloons and paragliding have been prohibited in Lahaul-Spiti and Kullu districts on June 11, officials said.

Issuing an order under section 144 of the Criminal Procedure Code, Lahaul-Spiti Deputy Commissioner Neeraj Kumar said the prohibitory orders have been issued to avoid any hindrance in the President’s aerial visit and ensure his safety and security. 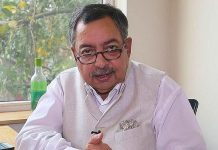