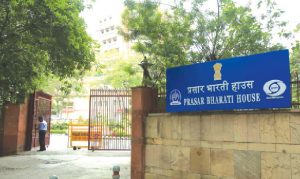 Prasar Bharati,  India’s Public Service Broadcaster  has established its own Recruitment Board with effect from July 1, 2020. A notification to this effect has been issued under Section 10 of the Prasar Bharti (Broadcasting Corporation of India) Act, 1990 pursuant to the Prasar Bharati (Broadcasting Corporation of India) Establishment of Recruitment Board Rules, 2020 notified by the Union Government in the Ministry of Information and Broadcasting earlier on February 12, 2020. It has paved the way for appointment of persons to the posts carrying scale and pay less than that of a Joint Secretary to the Government of India.

With this, the deck is now clear for recruiting regular employees to man news services of All India Radio and Doordarshan in their news, programming and engineering wings. Under this cover, RSS-affiliated personnel, who are currently recruited on contract basis by the current Chief Executive Officer (CEO), will be regularised. It also opens window for bringing Sanghi men/women on regular basis to complete the process of all round frontal assaults on all public institutions by the present NDA Union Government to end semblance of checks and balances on the democratic functioning of the Union Government and to subvert the thoughts and minds of the people through fascistic control of official propaganda machinery in all its dimensions and manifestations.

With the appointment of Prasar Bharati Recruitment Board, Human Resource (HR) Division in the Corporation stands dismantled and replaced to provide secretarial assistance, or logistic support, to the Recruitment Board. Union Public Service Commission (UPSC) and Staff Selection Commission (SSC) have also been divested of their responsibility for recruitment of personnel below Joint Secretary level in the Prasar Bharati. With this, the process of replacing wholesale contractual employees with a new such lot following change of government through electoral processes has been obviated as well. This will also ensure long-lasting imprint of Sangh ideology on the performances of All India Radio and Doordashan even after the change of guard at the Centre.

The Board will have a six-member outfit  headed by Jagdish Upasane, currently Director Bharat Prakashan and a former Vice Chancellor of Makhan Lal Chaturvedi Patrakarita Vishwavidyalaya (University of Journalism), Bhopal. He is associated with the RSS, revealing his importance in the likely scheme of things to come.

Recruitment Board will function as per the charter of its duty prescribed under clause 5 of the February 12, 2020 notification of the government in the Ministry of Information and Broadcasting. The constitution of the Prasar Bharati Recruitment Board will ensure wholesale subjugation of AIR and Doordarshan in terms of Hitlerian blitzkrieg strategy of the current one man Union Government.

Already, other public institutions like the judiciary, Election Commission, UPSC, CAG, CBI, NIA, ED, Income Tax authority, RBI, all regulatory authorities and others have fallen in line of the government dictates, subverting rule of law based on Constitutional democratic governance and public accountability, making a bonfire of democracy and reducing it to mere election-centric despite the fact that news services of the public broadcasters have always remained pro government of the day.