The furor generated in the aftermath of former President of India, Pranab Mukherjee’s acceptance of the RSS invitation to address new recruits of the organisation at its headquarters in Nagpur is not subsiding even after his speech there on June 7, which is being applauded by top-brass RSS office-bearers as well as the BJP but has evoked mixed reactions from the Congress and is critically looked upon by the Left parties.

Mukherjee’s decision had drawn criticism from several senior Congress leaders who had expressed surprise over his decision to visit the RSS headquarters, including his daughter Sharmistha Mukherjee, a Delhi Congress spokesperson, who had also tweeted against the visit. However, some experts have insisted that Mukherjee was no longer bound to seeing issues through a political or partisan prism as his active association with party politics ended after he became President in 2012.

The introductory speech of RSS chief Mohan Bhagwat, as well as speech of Pranab Mukherjee, entailed political message for different quarters. While calling the controversy over Mukherjee’s acceptance of invitation as “unseemly”, the RSS chief asserted that there could be difference of opinion and debate but one must keep the decorum. Asserting that for one destination, people could take different paths, Mohan Bhagwat said that diversity was good for India. He also underlined RSS’s commitment to “unifying” society and that the imprint of Indian culture can be seen on all Indians. According to some experts, this entailed a veiled message of caution for Narendra Modi government’s present policies.

Liberally quoting from Jawaharlal Nehru, Rabindranath Tagore, Kautilya, Lokmanya Tilak and Surendranath Banerjee, a former Congress party president during the British Raj, Pranab Mukherjee, in the course of his half-an-hour address delivered in English, delved into the concepts of nationhood, nationalism and pluralism. His speech entailed veiled messages for multiple audiences. He cautioned that any attempt to define India through “religion, dogma or intolerance” would only dilute the country’s existence. To the RSS, the former President recalled “vasudhaiv kutumbakam” (the world is one family) as the soul of Indian nationalism; to new Sangh recruits he spoke of the need for harmony; to his parent party Congress, he emphasised the need for dialogue and to PM Narendra Modi, he quoted Kautilya’s lessons in governance. He also used the occasion to drive home “diversity and acceptance” as the bedrock of Indian nationalism.

While describing the Constitution of India not merely a legal document but a Magna Carta for the socio-economic transformation of society, from which flows “our nationalism,”Pranab Mukherjee also commented on the “routine of violence” in the country, saying India may be the fastest growing economy but it was lagging on the World Happiness Index. Mukherjee said as he marvelled the fact that 1.3 billion Indians used 120 languages, 1,600 dialects, followed seven major religions, belonged to three ethnic groups and still stood united under one flag, one Constitution and one identity — “This is Bhartiyata.”

Pranab Mukherjee’s speech got bipartisan support with BJP general secretary Ram Madhav tweeting soon after: “Great address by Dr Pranab Mukherjee at Nagpur. His address and Dr Bhagwat’s address are in a way complementary to each other. Nation First is the core message of both.” Dubbing Mukherjee’s speech as that of an ‘elder statesman’, one RSS spokesperson said: “We welcome his speech and the points he raised on issues such as nationalism, patriotism, and the need to end all types of intolerance and violence.” According to media reports, BJP veteran L K Advani described Mukherjee’s visit and his illuminating exposition of the noble idea and ideals of Indian nationalism at RSS headquarters as “a significant event in our country’s contemporary history.”

The Congress, which has initially opposed Mukherjee’s acceptance of invitation from the RSS, changed its stance after the speech of the former President of India at Nagpur. While echoing its endorsement of some of the points raised by Pranab Mukherjee, a senior Congress spokesperson said: “As Indians and as Congressmen, we encourage and believe in the democratic dialogue and recognise the right and sanctity of dialogue across different thought processes but a dialogue is only possible in a democratic order with an open mind and willingness to change, accept and adapt to the other person’s point of view.” Nevertheless, some leaders of the Congress are still critical of Pranab Mukherjee’s move of going to RSS headquarters.

In the immediate aftermath of former president Pranab Mukherjee’s acceptance of invitation to visit RSS at Nagpur, a couple of critics had hypothesised Mukherjee’s move as exemplifying Buddhist notion of (seeking shelter under Sangh); nevertheless, soon after Mukherjee’s erudite speech and RSS chief’s explicit exposition that Sangh is Sangh and Pranab Mukherjee is Pranab Mukherjee, these critics lost no time in debunking their own hypothesis and starting saying that it was vice versa in view of RSS’s growing disenchantment with Modi government’s performance of the past four years, declining popularity of Prime Minister Modi, and emerging larger than life images of Modi-Shah duo eclipsing the BJP.

According to one analyst, Pranab Mukherjee has been a difficult political personality to gauge and it is in this backdrop that his real motive behind the visit to the RSS headquarters in Nagpur on June 7 may never be revealed. Nonetheless, the same analyst has further opined that Mukherjee would have factored in the net effect of his Nagpur sojourn on the Congress’s battle plans for the 2019 Lok Sabha elections.

One critic has opined that the presence of former President Pranab Mukherjee at the RSS event was as political as it could get, even though functionaries of the RSS and the BJP may debunk the observation. The fact remains that the event coincided with ongoing attempts by the Opposition to build an anti-BJP narrative to counter the “new BJP” under Prime Minister Modi and party chief Amit Shah.

Asserting that whichever way politicians spin it, another critic opines that the optics of Mukherjee presiding over the event is a big victory for Sangh, making the right-wing organisation appear tolerant and the Congress intolerant. It’s a smart move that has put the RSS in a good light, the streaming live visuals of Bhagwat and Mukherjee sitting on the same dais, talking about inclusiveness, diversity and plurality. Mukherjee’s presence provided credibility and endorsement to the Sangh as a “social-cultural organisation”, an image that very few among the non-BJP/ Sangh believe in.

While describing Mukherjee’s speech at Nagpur, generally hailed by his detractors, in fact, predictably tame, one political analyst has pointed out that the speech had flashes of lively points but otherwise, the speech was formal and staid so as not to upset the hosts too much and at the same time, careful not to concede any major point that they are often keen about. It is further pointed out that by using the framework of nation, nationalism and patriotism, the former president without necessarily being discourteous to his hosts, could have touched upon the contemporary — the post-independence challenge of being nationalist and, simultaneously, democratic.

Another analyst has pointed that even after having risked his reputation, having taken the trouble to go to Nagpur, Mukherjee did not make much of himself except that, for the record, he said all the politically correct things and in contrast, his host seized the opportunity admirably. For the first time perhaps, the RSS was getting extraordinary nationwide publicity. 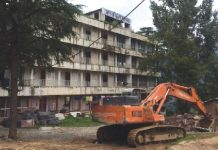