Former President of India, Dr. Pranab Mukherjee on Thursday addressed a gathering of RSS workers at the valedictory function of the ‘Sangh Shiksha Varg’ in Nagpur, the headquarters of the RSS.

In his speech, Dr. Pranab Mukherjee said, “I am here amongst you to share my understanding of the concepts of nation, nationalism and patriotism in the context of India. On 26 January 1950, the Constitution of India came into effect. Democracy became our most precious guide towards peace & regeneration from the swamp of poverty created by centuries of colonial rule. For us, democracy is not a gift, but a sacred trust. The Constitution of India represents the hopes & aspirations of a billion plus Indians. From our Constitution flows our nationalism.”

“We derive our strength from tolerance. We accept & respect our pluralism. We celebrate our diversity. Any attempt at defining our nationhood in terms of dogmas & identities of religion, region, hatred & intolerance will only lead to dilution of our national identity. India’s Nationhood is not 1 language,1 religion,1 enemy. It  is Perennial Universalism of 1.3 billion people who use more than 122 languages & 1600 dialects, practice 7 major religions & belong to 3 major ethnic groups, live under 1 system,1 flag & 1 identity of being Indian,” Mukherjee said.

Speaking further, Pranab said, “In a democracy, informed & reasoned public engagement on all issues of national importance is essential. A dialogue is necessary not only to balance the competing interests but also to reconcile them. Succinctly tells us that in the happiness of people lies the happiness of the king, their welfare is his welfare. The State is for the people,” Mukherjee added.

Addressing the RSS workers, Ex-President said, “People are at the centre of all activities of the State and nothing should be done to divide them. The aim of the State should be to galvanise them to fight a concerted war against poverty, disease & deprivation. Only then can we create a nation where Nationalism flows automatically,” he concluded.

Earlier in the day, Pranab Mukherjee visited the birthplace of the RSS founding member Keshav Baliram Hedgewar at the RSS headquarters. He was welcomed by the RSS chief Mohan Bhagwat. “Today I came here to pay my respect and homage to a great son of Mother India,” the former president wrote in the visitor’s book. 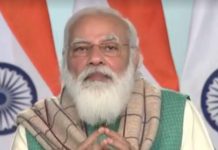