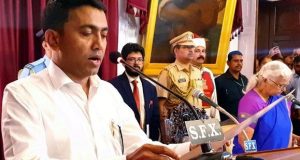 The Bharatiya Janata Party’s (BJP)s Pramod Sawant took oath as the chief minister of Goa at 2 am on Tuesday.

“I have taken charge as Chief Minister with utmost humility and sense of gratitude towards my idol and mentor Manoharbhai. However, the state mourning continues and hence I appeal to all my friends, family and karyakartas to refrain from presenting me with bouquets and greetings. Rather I look forward to your blessings and support in carrying ahead the glorious legacy of commitment towards good governance! Jai Hind!” Sawant said.

The 45-year-old took oath along with ministers in his 12-member cabinet that included his two deputies.

Sawant took over from former defence minister and four-time Chief minister of Goa Manohar Parrikar, who was cremated at the Miramar beach on Monday.

Sawant’s swearing-in ceremony was initially scheduled to be held at 11 pm on Monday but it was pushed back, as the BJP deliberated with allies to secure his position as the consensus candidate for the chief minister’s post.

Besides Chief Minister and his two deputies, nine other ministers of the state cabinet were also sworn in at the late-night ceremony.

The new government was sworn-in with the support of 20 MLAs, including 11 from the BJP and three each from GFP, MGP and Independents.

All the MLAs supporting the coalition were present at the oath ceremony.

Manohar Parrikar died on Sunday evening after battling with cancer for over a year. He was cremated with state honours on Monday at Panaji’s Miramar beach, with thousands gathered to bid the affable politician a fond farewell.