Ever wondered why civil servants pick up adequate courage to write their memoirs only after they retire? Well, because there is no pressure of getting hauled up by the establishment for speaking out or writing beyond the (politically) set parameters! In fact, even then, at that retired stage, only few manage to write along the absolutely stark format. Perhaps, all through their training period and the service years, the very tendency has been to refrain from offloading, to be confined within the safe zone; where there is less fear of getting hounded by the political bosses.

Look at the way the establishment has reacted to the J&K cadre bureaucrat, Shah Faesal’s  tweet on the rapes taking place in the country. The tweet reads “Patriarchy+Population+Illiteracy+Alcohol+Porn+Technology+Anarchy = Rapistan!”

The Centre was not just fumed but has ordered an action against this topper  bureaucrat of the 2011 batch.  In fact, Shah Faesal, 35, is the only IAS officer from Jammu and Kashmir to have ever topped the civil services and  he is currently an  Edward S Mason Fellow at Harvard Kennedy School on study leave.

Tell me, what’s amiss in his tweet! Perhaps, he should have added a couple of additional words — Lynchistan or Jungle Raj or Murderous Rulers to relay the  realities of the day.

Also, doesn’t a civil servant carry the basic right to spell out the realities of the day? Nah! not just in the dusty files but for the masses he is supposed to administer.Of course, in today’s lopsided governance the civil servant is reduced to serving only the political rulers and not the ordinary folk who are kept at a distance with security phobias  hovering around just about anyone fitted in  the rulers’ slot.

And if a civil servant dares to talk aloud or write candidly, he is singled out, readied to be suspended, if not mauled in varying ways.

The  first  bureaucrat who was hounded by the then establishment was Chaturvedi Badrinath of the Tamil Nadu cadre. This was in the early 70s when controversy erupted in the backdrop of the governmental venture — ‘Time Capsule’. And this bureaucrat raised several pertinent queries in the context of the historical contents to be embedded in that capsule. Needless to add, this up right bureaucrat’s career was severely affected. But, not his morale and confidence.

During several interviews with me, he had detailed that even after he was suspended and questioned, he remained firm on his stand and then  took to writing on ‘Dharma’.

Later, of course, he tool premature retirement and  moved far away from babugiri towardsthe world of academics and wrote  books after another till he died in 2010 , in Puducherry .

Coming back to today’s India, the situation stands compounded. Even before the government’s order, the Right wing goon brigades will do so.

Even the political preferences of the civil servants have to be kept away from public domain. In 2016, didn’t we witness the plight of the Madhya Pradesh bureaucrat, Ajay Singh Gangwar, who was handed his transfer orders after he praised former Prime Minister Jawaharlal Nehru on Facebook. Gangwar, then collector of Barwani district of Madhya Pradesh, had to even delete one of his posts which  appeared to be indirectly critical of the BJP.

And early this year, 2018, Bareilly district magistrate Raghvendra Vikram Singh was also charged with violating service rules after he put up Facebook posts that appeared to blame right-wing brigades for provoking communal clashes in certain districts of Uttar Pradesh.

In fact, last year Singh had written a similar post, where he had hit out with this fact — in Khelam area of Bareilly, a group of kanwariyas, went through a Muslim-dominated village and had raised provocative slogans …But this brave upright civil  servant who had dared to speak out was made to remove his Facebook post.

Around the time of rioting in Kasganj, at least two senior officers posted there were heard and seen on the television saying that just as several young boys of the Muslim dominated locality of Kasganj were readying to unfurl the National Flag, men on bikes, said to be affiliated to the VHP and other Hindutva brigades, not just disrupted the about- to -begin flag hoisting function but raised provocative slogans.

Not to be overlooked the fact that Yogi Adityanath government transferred district police chief Sunil Kumar Singh after communal rioting in Kasganj, because he had also bared out another of those dark truths of the communal madness.

Not sure what punishment was meted to the then district magistrate of Kasganj as he too was honest about the ground realities prevailing in today’s Uttar Pradesh. To quote him from a news report – “fringe groups coming up in every part of the state, taking the same ugly route to instigate people of the minority community by forcefully entering their locality in the name of nationalism.”

Tell me what’s amiss if a civil servant speaks out and hits out at the dark realities of the day! After all, he is focusing on the ground realities. 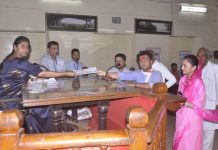