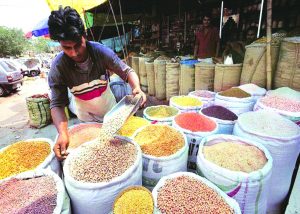 A massive rise in food prices has pushed India’s retail inflation in December to a 65-month high of 7.35 per cent from 5.54 per cent in November, while the wholesale price-based inflation shot up to 2.59 per cent from 0.58 per cent in the same period. Inflation affects everybody but it hits the poor hardest.

According to a communication issued by the National Statistical Office (NSO), Ministry of Statistics and Programme Implementation on January 11, about the first advance estimates of national Income at both Constant and Current Prices, for the financial year 2019-20, the Gross Value Added (GVA) at Basic Prices for 2019-20 from ‘Manufacturing’ sector is estimated to grow by two per cent as compared to growth of 6.9 per cent in 2018-19.

Similarly, the GVA at Basic Prices for 2019-20 from ‘Construction’ sector is expected to grow by 3.2 per cent as compared to growth of 8.7 per cent in 2018-19. The sector-wise estimates are obtained by extrapolation of indicators like Index of Industrial Production (IIP) of first 7 months of the financial year, (ii) financial performance of Listed Companies in the Private Corporate sector available up to quarter ending September 2019 (iii) 1st Advance Estimates of Crop production, (iv) accounts of Central & State Governments.

Major highlights of the data released by the National Statistics Office (NSO) are:

— Food inflation surged to 14.12 per cent in December last year as against 10.01 per cent in November.

— Vegetable prices inflation increased to 60.5 per cent in December, a significant jump from 36 per cent the previous month.

Core inflation was recorded at 37 per cent in December.

Inflation rate in cereals and products stood at 4.36 per cent in December.

The steep rise in the prices of essential commodities and decline in GVA of manufacturing sector makes it even tougher for the lower strata to make ends meet. In recent weeks, the powers that be have been so preoccupied with dousing the fire triggered by some controversial legislations and unsavoury incidents at the Jawaharlal Nehru University.

As we have noted, the consumer food price inflation touched 14.42 per cent in December 2019 from a mere 2.99 per cent in August the same year. The NSO data also shows that this sharp rise, a six-year high since November 2013 when it was 18.89 per cent, was because of increasing onion, tomato and dairy prices. It is worth mentioning that vegetable inflation rose to 60.5 per cent in December compared to 36 per cent in November. The inflation in the vegetable segment spiked by 60.5 per cent as compared to December 2018 is the combined effect of climate change, inefficient trade systems due to no cash in rural economy and the rise in global food prices.

The NSO is responsible for conduct of large-scale sample surveys in diverse fields on All India basis. Primarily data are collected through nation-wide household surveys on various socio-economic subjects, Annual Survey of Industries (ASI), etc. Besides these surveys, NSO collects data on rural and urban prices and plays a significant role in the improvement of crop statistics through supervision of the area enumeration and crop estimation surveys of the State agencies.  It also maintains a frame of urban area units for use in sample surveys in urban areas.

The fact is that a massive rise in food prices has pushed India’s retail inflation in December to a 65-month high of 7.35 per cent from 5.54 per cent in November, while the wholesale price-based inflation shot up to 2.59 per cent from 0.58 per cent in the same period.

Wholesale prices-based inflation surged to an eight-month high of 2.59 per cent in December, as against 0.58 per cent in November due to sharp rise in prices of food articles like onion and potato. The annual inflation, based on monthly wholesale price index (WPI), was recorded at 3.24 per cent in April 2019. WPI was at 3.46 per cent during December 2018.

Build up inflation rate in the financial year so far was 2.42 per cent compared to a build up rate of 2.92 per cent in the corresponding period of the previous year.

The rate of price rise for food articles rose to 13.12 per cent during December as against 11 per cent a month earlier, while for non-food articles it rose nearly four-fold to 7.72 per cent from 1.93 per cent in November. Among food articles, vegetable prices surged by 69.69 per cent, mainly on account of onion, which witnessed 455.83 per cent jump in prices, followed by potato at 44.97 per cent.

Retail inflation, measured as consumer price index (CPI), was 5.54 per cent in November and 4.62 per cent in October last year. This is third consecutive month where retail inflation has breached the central bank’s medium-term target of 4 per cent. The government estimates GDP to grow at 5 per cent in financial year 2020, a sharp drop from the 6.8 per cent recorded in financial year 2019. In the quarter that ended on September 30, 2019, GDP growth stood at 4.5 per cent.

The Reserve Bank of India had kept its key interest rates unchanged in its last monetary policy review in December 2019, and it is still unclear if they will pause or cut rates in February. The Monetary Policy Committee (MPC) will next meet from February 4-6.

The sharp rise in retail inflation in December comes as another blow to the economy at a time when the government projects it to grow in the current fiscal at five per cent, which is the slowest pace of growth in 11 years.

Minister of Consumer Affairs, Food and Public Distribution, Ram Vilas Paswan said that of the total 18,000 tonnes of imported onions, only 2,000 has been sold, an indicator that further strengthens the case for an economy struggling to meet basic necessities. This imported onion, the minister noted, will now be sold at 22 per kilogram.