Smog enveloping the capital city. New Delhi caught in that smog, human beings affected, breathless and restless. Choking and crying out, as smog tightens its hold on our throats and chests…killing us in that slow steady way.

Inhalers and masks the urgent need of the day, as citizens go coughing amidst cries …trying to survive in this façade-ridden scenario where even encounters are turning out to be fake. Harnessing of that tiny little mosquito or any of the strays loitering around seemingly impossible by all possible might under the state machinery, so in utter frustration they hound and pound the two-legged human being ,who is anyway dying a painfully slow death in these developed times!

And as I walked around, gasping in the midst of this haze, I came across several freshly opened medical outlets equipped with surgical dens. Nah, not to be confused with surgical strikes, though not too certain of the near killing sessions well-inside in the operation theatres. Outside the hospital wards and operation theatres, the dying and even the undying discussing death and the human destruction in these developed times.

Though this smouldering smog can be called as one of those levellers but even here money coming to the rescue of those well-equipped with sagging-pockets. For them holds out an array of air purifiers and conditioners and all those get- away destinations How many amongst us can actually flee?

Wrapped in nostalgia, wondering rather aloud: weren’t we better off in those good old days when ‘developing’ or ‘under-developed’ we were with fewer wants.Just two square meals and that once –in a while dining out sessions seemed to take care of everyday wants.

The skies up there looked blue .The flowers bloomed. The human face looked carefree and hassle free…the human form was still intact and those cravings for emotional anchorages were not to be confused with surcharged sexual releases. Those were the good old days when we actually lived and lived quite happily! Not like today where even the basic traces of survival are turning out to be an ongoing struggle for survival.

I am more than shocked when rulers of the day continue to talk of growth, development, longevity, and whatever else they can package in their package of lies. In fact, contrary to their claims, today, in these so called developed times we are more prone to deaths and decay.

The environmental pollution is killing our very organs. Not to overlook the noise pollution hitting the very heart. And the limbs cannot be left spared with strays around. In fact, in these recent months wherever I have travelled local residents have cried out, detailing the havoc caused by monkeys and dogs on the prowl. Blatantly attacking pedestrians and intruding into homes and fields yet there is nobody out there to harness their moves. Shouldn’t the municipal authorities step in? Shield the human being from these deadly attacks. In fact, though we talk of dengue and viral fevers but little focus on rabies. Why? What’s become of us to be overlooking these deadly animal bites and attacks.Today who cares whether our flesh is ripped through and we die a painful death! 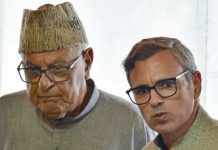