The Aam Aadmi Party and Congress have repeatedly targeted the Punjab’s ruling Badal family for failing to address the problem of drug abuse locally called ‘chitta’ in the state. The two parties had been alleging that 70 per cent of Punjab’s youth was addicted to drugs. However,the Prime Minister, Narendra Modi while kick-starting Punjab campaign had said that some parties were bad mouthing Punjab’s youth.There are conflicting views but the seizure of 2,632kg of drugs and narcotics including large quantity of heroine, poppy husk, charas and ganja ever since the imposition of model code of conduct for the Assembly polls shows that the situation is alarming in Punjab on this front.

Though when it comes to seizure of cash, Uttar Pradesh tops the chart. Of the over 96 croreseized till January 28, UP alone accounted for 87.67 crore.The Election Commission-appointed surveillance and expenditure monitoring teams in the five poll-bound states which released the data say that maximum cash has been seized from Uttar Pradesh which totals 87.67 crore followed by Punjab which accounted for 6.60 crore and from Goa about 1.27 crore was seized during raids. Uttarakhand stood at number four in case of total recovery with an amount of 47.06 lakh in and Manipur at 8.13 lakh.

Drug seizures double
Drug seizures by the anti-narcotics agencies and police teams came on the expected lines as in Punjab, where drug abuse is the major poll plank, maximum recovery has been reported from the border state. Total drug seizure from the five states are about 4,774 kg whose present market value as per the police is 19.83 crore. Of this total haul, Punjab accounts for 2,632 kg valued at 12.30 crore followed by UP which accounts for 2,035 kg worth 4.89 crore, Manipur worth 2 crore, from Goa about 6.85 kg of the similar consignment was recovered by agencies worth 34.22 lakh in Goa and about 28.54 lakh worth contraband in Uttarakhand.The total volume of drug seizures including heroin, poppy husk, charas, Ganja and smack among others has doubled in a span of 10 days, the data revealed. Interestingly in Punjab, 163.8 kg gold and 26.5 kg silver worth around 26 crore was recovered. No other state had reported seizure of the precious metals since the poll code was imposed.

Liquor not far behind
In other illegal inducements suspected to be used to lure voters in these States, a whopping 14.27 lakh litres of liquor worth 25.22 crore has been seized by Election Commission appointed police and excise teams in the respective States. In UP liquor seizures were recorded at 8.01 lakh litre valued at 20.62 crore followed by over five lakh litre spirits worth 2.69 crore seized from Punjab, over 36,000 litre liquor worth 93.91 lakh from Uttarakhand, 71,000 litre worth 81.80 lakh from Goa and worth 15.14 lakh from Goa.In Punjab’s Bathinda another one lakh liquor bottles were seized by surveillance teams for which the valuation is being done.

Unknown sources of poll funding
It is not only the large seizure of drugs, narcotics, liquor and cash in the five poll bound states that shows what ails our election system, an analysis of the Income Tax returns and statements filed with the Election Commission of India by different political parties shows that the source of funding remains largely unknown. At present, political parties are not required to reveal the name of individuals or organizations giving less than 20,000. As a result, over two-thirds of the funds cannot be traced and are from ‘unknown’ sources. This becomes very relevant in the light of recent events when demonetization was announced so as to weed out black money from the society. While the National Political Parties were brought under the RTI Act, they have still not complied with the decision.

ADR findings
As per the Association for Democratic Reforms, a Non-Profit Organization and as per the details of the donors available from contribution report submitted by political parties with EC, the total contribution that the political parties received from year 2004-05 to 2014-15, a whopping 11, 367.34 crore. However, only 1,835.63 crore was shown in documents from known sources which is just 16 per cent of total contribution. Income of political parties from other known sources like sale of assets, membership fee, bank interest and sale of publications etc was 1698.73 crore of 15 per cent of total income.That leaves 69 per cent of total income or 7,832.98 crore uncovered or from unknown sources. Six national parties (INC, BJP, BSP, NCP, CPI and CPM) and 51 Regional recognized were considered for this analysis, including AITC which was declared a National Party only in September, 2016.

Of the regional political parties, 45 out of 51 significant regional partieshad not submitted their donations statement to EC for at least one financial year.There are 12 regional parties which had never filed their contributions report since 2004-05 are: J&K PDP, AJSU, NPP, RSP, MPC, KC-M, SKM, AINRC, PDA, MSCP, HSPDP and PPA.

The seizure of 2,632kg of drugs and narcotics ever since the imposition of model code of conduct for the Assembly polls shows that the situation is alarming in Punjab on this front

BSP’s dubious distinction
Among all the national and regional parties, perhaps Bahujan Samaj Party is the only party to consistently declare receiving ‘nil’ donations above 20,000 between 2004-05 and 2014-15. Thus 100 per cent of the party’s donations came from unknown sources. The total income of the party increased by a staggering 2057 per cent from 5.19 crore during 2004-05 to 111.96 crore during 2014-15. The lacunas in the existing system could be understood from the fact that the Enforcement Directorate detected on December 26, 2016 cash deposits totaling over 104 crore in an account of Bahunan Samaj Party and 1.43 crore in an account belonging to party chief, Mayawati’s brother Anand Kumar in Karol Bagh branch of United Bank of India in New Delhi. The discovery of such a huge amount after demonetization was detected by the ED during a routine survey to check suspiciously huge cash deposits.

As Section 13A of the Income Tax Act, 1961 grants exemption from tax to political parties in respect of their income from house property, other sources, capital gains and income by way of voluntary contributions received from any person.The only rider is that the exemption in respect of contributions would be available when the political parties keep and maintain a record of all contributions with names and addresses of the persons who had made such contributions.This means an anonymous contribution below 20,000 is completely exempted for the purpose of Income Tax and in case of BSP, almost the entire donation comes from donors who ‘donate’ less than 20,000 each.

While all this goes on, I recall the famous lines of Robert Browning in Pippa Passes: God’s in His heaven— All’s right with the world! 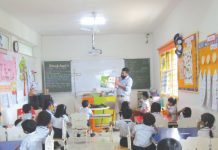