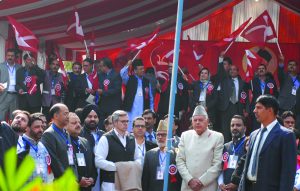 National Conference and the PDP, J&K’s two major regional parties, have once again dusted off their headquarters in Srinagar and started holding meetings. This has created some political buzz in the Valley, even though there is still no such activity visible on the ground. Major politicians including three former Chief Ministers — Dr Farooq Abdullah, Omar Abdullah and Mehbooba Mufti — continue to be under detention. And there is still no telling when or if the government will release them anytime soon.

The NC meeting at its Srinagar office was chaired by a mid-ranking leader Showkat Mir, in the absence of the senior leaders who are house arrest. Between 200 to 250 workers attended. According to the party’s spokesperson Imran Dar, the meeting shouldn’t be deemed as the resumption of political activity.

Government’s main concern seems to be the form the response of these leaders to the withdrawal of Article 370 will take. The leaders have bitterly opposed the repeal of the state’s special status and vowed to fight for its restoration. In the run up to the abrogation of the Article 370 on August 5, all mainstream parties had closed ranks against such an occurrence but to no avail.

On the eve of August 5, all major mainstream leaders had gathered at residence of Dr Abdullah to formulate a joint response against the withdrawal of Article 370. This came to be known as Gupkar Declaration. In a recent interview, the NC leader and the Member Parliament Hasnain Masoodi said that the Gupkar declaration will be the basis of a future course of action by the Kashmir based political parties.

There are many forms of political response in the Valley currently being bandied about. Once released, these politicians could decide to unite and launch a mass movement for the reversal of the Article 370 revocation. Considering the mood in the Valley, such a movement is likely to witness an overwhelming public participation. And should this happen, the long running movement for freedom in the UT will meld with the struggle for the restoration of special rights under India’s constitution.

“For once, both separatists and unionists may define their politics in adversarial terms to New Delhi, if not sharing the same platform,” says Naseer Ahmad, a columnist. “And this can pose New Delhi its biggest challenge in Kashmir. For the first time in seventy years, it may find no Kashmiri leader is on its side in J&K”.

But seized of the potential implications of the release of the mainstream politicians, New Delhi seems unwilling to take any such step anytime soon. Other than three chief ministers, centre’s sweep in Kashmir encompasses many major politicians and civil society actors. A former MLA Engineer Rashid has been slapped with Public Safety Act. In all this, Dr Abdullah’s arrest has stood out as an act of overreach. He  is not only the tallest mainstream leader in J&K but also one of the senior most leaders in the country. He has always stood for the country’s cause in Kashmir and for which he has always been abhorred by separatist groups.

Abdullah is important also because of who he is in his personal capacity: son of Sheikh Mohammad Abdullah, who was instrumental in tying Muslim majority J&K’s lot with Hindu majority India in the wake of partition. Sheikh rejected Muslim-majority Pakistan that asserted its right to the state, and still does, under Two-Nation Theory that partitioned India following liberation from Britain.

Abdullah also came in handy to New Delhi through nineties to fight off the international scrutiny of the human rights situation in Kashmir. He was gainfully deployed across the world to defend India on Kashmir and blame Pakistan for the turmoil in the state. But now Abdullah is in jail under Public Safety Act. His release, if and when it happens will be the most important development of the post Article 370 Kashmir.

Meanwhile, first stirrings of some political activity are in evidence with the reopening of offices of mainstream parties. But it will formally restart only when the top leaders like Dr Abdullah, Omar and Mehbooba are released and allowed to hold political meetings and talk to people. 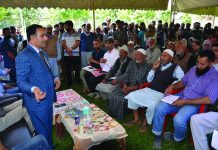