Come May 12, Karnataka goes to poll for 224-Assembly seats for which a whopping number of candidates have filed nominations. Bulk of the seats are being contested by the ruling Congress, and the opposition BJP as well as Janata Dal (Secular) or JD-S. Besides, Independents and candidates from regional parties are also contesting in large numbers. The intervening period is witnessing a hectic flurry of political activity in all major and minor contending parties. Undoubtedly, experts don’t see any wave either in favour of against the key political parties — ruling Congress, rival BJP and the JD (S) — nevertheless, the electioneering is witnessing exchange of barbs or jibes via social media, allegations and counter-allegations in election rallies and the last-minute efforts to woo the voters.

Congress enjoys the advantage of strong state leadership in the persona of chief minister Siddaramaiah, who has been the last in the party in Karnataka, from candidate selection to poll strategy and campaigning, unlike in the BJP which is being managed viaremote-control from New Delhi. Some critics opine that Siddaramaiah’s political googlies — picking up the Kannada language or opposition to Hindi found resonance with the Kannadigas or painting the Centre as a step-mother favouring North Indian states or the most recent one of granting minority religious status to the powerful Lingayat community – haveproved instrumental in eclipsing the local leadership of the BJP. His bold stand on Cauvery water-sharing also falls in this category.

Siddaramaiah’s emphasis on regional issues has earned some mild criticism from certain quarters, but concurrently it is also seen by some as bulwark against BJP’s brand of nationalism, which the local BJP leadership is finding it difficult to effectively puncture this narrative. While making the assembly polls a battle between regionalism and BJP’s style of nationalism, Siddaramaiah government has also come out with welfare schemes like food for the poor — Indira Canteens.

In the wake of the BJP’s announcement of the campaign schedule of PM Modi and UP chief minister Yogi Adityanath, Siddaramaiah brooked no delay in riling the BJP by calling its star campaigners as “north Indian imports” and their presence in Karnataka an admission of the fact that the BJP has no leaders in the state. One critic has dubbed this as return of the north vs south rhetoric to Karnataka. Bristled at its leaders being dubbed as outsiders to Karnataka, the BJP hit back by accusing Siddaramaiah of stooping low and pointed to Sonia Gandhi and Rahul Gandhi, also non-Kannadigas like Modi and Adityanath.

Being aware of the BJP’s strategy of playing up a nationalistic brand of politics, Siddaramaiah has brought to the table his brand of identity politics — Kannadiga — which is touted as Siddaramaiah’s way of ensuring even the voter wears his Kannadiga identity on his sleeve. The growing resentment over the BJP-ruled Centre’s efforts of pushing Kannada to play the second fiddle to Hindi even in Karnataka, especially in exams conducted by departments of the Government of India found its articulation in incidents of defacing signage at Metro rail stations in Bengaluru and spraying paint over the names of the stations written in Hindi. Some experts opine that this linguist pride has got intertwined with the Kannadiga identity and Siddaramaiah is tapping into the feeling among proud Kannadigas who feel that a Kannada speaker is considered inferior to someone who articulates in Hindi. Recently, this author was in Karnataka and chanced to have one-to-one talk with Siddaramaiah in Nagnahally district of Mysore, wherein the latter expressed full confidence of again forming the next government. The chief minister who was conducting door-to-door campaign ruled out the possibility of any negative impact of anti-incumbency factor because his government had dome more good things on account of which the people were satisfied with his government.

Majority of political observers agree that under the current scenario, the BJP is finding the going tough in Karnataka. They also opine that the BJP’s chief ministerial face Yeddyurappa and his supporters are finding it difficult to counter Siddaramaiah’s narrative based on Kannada pride and the manner in which he has managed to paint the Central government as the villain. The state BJP unit, finding itself on a weaker wicket, is pegging hopes on PM Modi, its pinch hitter, to rescue the team, like he did in Gujarat assembly elections at the fag-end of campaigning.
The BJP’s attempts at making corruption as its main plank seem to have run into a rough weather because Yeddyurappa as the CM face weakens this plank as he was, in people’s perception, infamously immersed in corruption and his governance found wanting on different fronts. Besides, the BJP high command’s decision to refuse a ticket to Yeddyurappa’s son reinforces what Siddaramaiah has been underlining that the north Indian leaders call the shots in BJP, reducing Yeddyurappa to a figurehead.

Theatrical antics in the form of jibes, barbs, allegations through social media outlets like Twitter and Facebook have come to roost in Karnataka. Now with the Congress as well as the BJP being desperate to win Karnataka, both have taken to social media in a big way, making political use of technology, and even the JD (S) is not lagging behind.
Electoral rivalries between the BJP and Congress no more remain confined to just rallies and road shows, but increasingly about tweet wars, Facebook likes and WhatsApp forwards.There has been frequent exchange of barbs on Twitter between present incumbent Siddaramaiah and the BJP’s chief ministerial face BS Yeddyurappa. The Congress social media unit, comprising about 50 volunteers, reportedly works on graphics, tweets and Facebook posts to counter “fake news” put out by BJP handles. The BJP’s social media units, comprising 5,000 volunteers spread across the state, are working to spread the BJP messaging since August last 2017. Their main job is to highlight what they call the “misgovernance” of the Siddaramaiah government and “negativity towards Hindus.”
In the wake of dissemination of fake news assuming serious dimensions, a leading English Daily has recently warned that Internet fakery is now taking an even more vicious avatar called “Deepfakes”, which uses Artificial Intelligence to make anyone say or do just about anything on video. Undoubtedly, social media is credited to have made the world a more democratic place; nonetheless, it is also said to produce fakery that plays on naive minds, and polarises society more ominously than the rampaging mobs during riots.

The tone and tenor of election campaigns, especially during the state assembly elections, is assuming such dimensions that belittle the importance of India’s claim to be the largest successful democracy in the world.

Political slugfest, mud-slugging, usage of unparliamentary language and character assassination on individual basis and on the basis of caste have become features frequently deployed during the election campaigns, as witnessed in UP assembly elections and in Gujarat assembly elections and a part of this scenario can be seen in Karnataka as well.

This is a dangerous trend that needs to be curbed at the earliest by making suitable amendments in the election law. Karnataka has the distinction of being a State where no party since 1985 came to power for a second consecutive term and no CM has returned after a full five-year term since Devaraj Urs in 1978. Undoubtedly, both Congress and the BJP are confident of winning the elections; nevertheless, if Congress succeeds in wresting power for the second time consecutively, it will explode 33-year old myth and for that we will have to wait till May 15.

Dr. Anil Singh is Executive Editor of News24, the author was recently in Karnataka & views expressed are author’s own 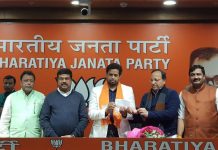