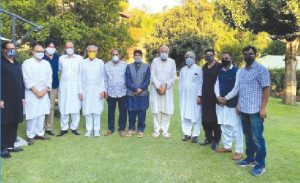 On August 22, more than a year after the withdrawal of Article 370 that granted J&K its semi-autonomous status under India’s constitution, six major mainstream parties including Congress got together to jointly fight the move. They released a joint statement after days of secret deliberation in which they expressed their resolve to abide by the Gupkar Declaration of August 4, 2019 — a day before the revocation of Article 370 — in which these parties had resolved to protect the state’s special constitutional status and fight against any move to
dilute it.

“The series of measures undertaken on 5th August 2019 were grossly unconstitutional and in reality measures of disempowerment and a challenge to the basic identity of the people of J&K. The measures attempt to redefine who we are,” the joint statement read. “We are committed to strive for the restoration of Articles 370 and 35A, the Constitution of J&K and
the restoration of the State and any division of the State is unacceptable to us. We unanimously reiterate that there can be ‘nothing about us without us”.

Though in recent past there has been some muted resumption of the political activity in Kashmir Valley, the release of a joint statement is a big political move. Its significance also lies in the fact that it is going to dictate the terms of future politics of J&K for a long time to come. The six parties form almost all the mainstream politics of J&K. Outside them, the BJP is the only other major mainstream political party in J&K.

The statement took everyone by surprise in the Valley as earlier several efforts by these parties to meet had been frustrated by the administration. Besides, there are still some leaders who are either under house arrest or under detention. The PDP president and former J&K Chief Minister Mehbooba Mufti has been slapped with Public Safety Act. And the leaders who have been released, among them National Conference president Dr Farooq Abdullah and his son Umar Abdullah — both former J&K chief ministers — have largely maintained a low-key political profile. They have also been restrained in their statements.

That is why the strong language of the statement also made people to sit up and take note. The use of phrases like “in a spitefully short-sighted and unconstitutional move”, and “these are testing times and time of pain” were evocative and geared to appeal to the prevailing sentiment in the region.

What happens next now? This would be clear in the coming weeks and months. But one thing is clear: the statement marks the beginning of the resumption of the political activity in the Valley after a hiatus of one year. The past few weeks have witnessed political parties gingerly resuming some activity.

Earlier last week National Conference had held a formal meeting at the residence of Abdullah. It was a meeting essentially to test the government’s claim before the high court that no National Conference leader was under detention in Kashmir and that they were free to move, subject to necessary security arrangements. All four leaders — party general secretary Ali Mohammad Sagar and former ministers Mohammad Shafi, Abdul Rahim Rather and Nasir Sogami — who were supposed to be under house arrest made it to the meeting, thereby lending credence to the government claim.

Later addressing the media, Abdullah steered clear of discussing the political issues but he did swear his commitment to the Gupkar declaration. He also revealed his plans to call an all party meeting in near future.

Will such a meeting take place in near future? After the joint declaration, a meeting of all mainstream parties seems like the next logical step. And this can take place even in the absence of Mehbooba Mufti who is unlikely to be released considering her hardline stance on the repeal of Article 370.

So far, National Conference has been at the forefront of the fresh political activity in the region. In a recent statement, the party had called for “reopening of all traditional routes including Kargil-Skardu, Jammu- Sialkot and Poonch-Rawalakot to allow free movement of people across the Line of Control with Pakistan and Line of Actual Control with China and to promote people-to-people contact and strengthen inter-regional trade and cultural links”.

Once considered  mother of all confidence building measures  the BJP government  closed Srinagar-Muzaffarabad and Poonch–Rawalakot roads following Pulwama bombing that killed  40 CRPF personnel leading to skirmishes  between India and Pakistan. The cross-LoC bus service was started in April 2005. The trade was latter added in 2008. But all such CBMs have come undone over the past two years Going forward, the politics is only expected to gather momentum. But what is also important is how the administration would respond to the evolving situation. So far, it has sought to relentlessly supress every sign of dissent against the withdrawal of the region’s special status. The Government’s main concern seems to be the form the response of these leaders will take. And also, after the fresh joint declaration, this will also be the challenge for the political parties.

But the choices before them aren’t easy. As the situation over the past year has demonstrated, he administration is hardly likely to countenance the dissent or challenge to revocation of Article 370 beyond a point.

But the political parties could still decide to unite and launch a mass movement for the reversal of the constitutional changes. Considering the mood in the Valley, such a movement is likely to witness an overwhelming public participation.

Taking the fight to the street, however, looks easier said than done. So the  parties are likely to be content to issue formal statements about the day to day situation, only occasionally foraying into an activity that seeks to confront centre on Article 370.

Much also depends on whether centre seeks to directly rule the union territory through a Lieutenant Governor or holds election to the legislative assembly. Or whether the centre takes steps to restore the statehood. In his speech on Independence Day, the Prime Minister Narendra Modi promised an early election of a chief minister for J&K. He didn’t, however, make it clear whether the elected chief minister will be that of a union territory or a state. As things stand, it is unlikely that the statehood to J&K will be restored anytime soon. So, the political activity, if any, will have as its arena the union territory. This makes them subservient to the Lieutenant Governor. And for that matter, even an elected Chief Minister. This reality detracts from the power of the local politics to change anything. As long as J&K remains a union territory, any elected government will have little power to change anything or at least undo any of the laws passed over the last year.