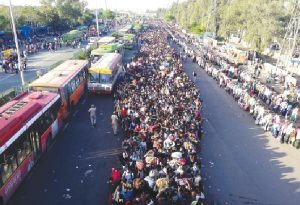 The biggest human crisis after independence unleashed after community spread of Coronavirus pandemic experienced by millions of migrant daily wagers whose plight for survival compounded after politics of dominance between ruling Bhartiya Janata Party and Congress Party exposed inhuman face of politics in handling such an unprecedented sensitive human tragedy. The tug of war over extending helping hand to them, made worst their on-going miseries for the last two months of unexpectedly extended lockdown, losing jobs and resultant financial conditions forcing towards starvation compelled them to take the path of revolt showing civil defiance for restrictions on freedom of movement.

The sufferings of migrant workers witnessed massive violation of social distancing on the roads as well as in the overcrowded quarantine hubs especially created to isolate them to check community outbreak of pandemic. Utter chaos and administrative mismanagement further aggravated the woes of pathetic hapless crowd gathered on the baron streets marching towards their native villages after losing all hopes for rehabilitation of job, food and financial support.

The scenes of pain and agony did not deter shadow-boxing between Uttar Pradesh Chief Minister Yogi Adityanath and Congress general secretary Priyanka Gandhi Vadra over arranging transport for the State’s migrant workers to drive them home safely. The high pitched political drama in the midst of a pandemic and a cyclone actually shook the very conscience of entire humanity.

The gesture of Congress to drive them home from the borders of NCR, Delhi, Gurugaon, Noida, Ghaziabad and Rajasthan turned out to be a nightmare for its state leaders and activists. After the hard posture shown by chief minister Yogi Adityanath against Congress, ostensibly targeting political gains for his party, the prominent Congress leaders including its state president Ajay Kumar Lallu had allegedly faced wrath of unbridled administrative excesses and languishing behind the bars in a solitary cell of Lucknow jail under heinous charges of forgery attracting severe punishment including life imprisonment.

The Hazratganj police station of Lucknow on a written complaint of government officials had registered an FIR under sections 182,420,467 and 468 of IPC against Lallu and Sandeep Singh, who is Priyanka Gandhi Vadra’s personal secretary, after the party leaders traded charges with the Yogi Adityanath government and held a protest at the Rajasthan-UP border. Lallu was arrested from the spot in Agra and as soon as he was released on personal bond next morning he was picked up by Lucknow Police in connection with atrocious charges of forgery and fabrication of records submitted before public authority.

Responding to a call of Congress General Secretary Priyanka Gandhi, thousands of party workers had come out actively to offer relief services of food and water to migrant labourers across the roadside camps for these destitute migrant labourers who flooded the heated streets of various towns just desperately walking barefoot in utmost adverse climatic conditions and health hazards without any food and water support.

Disgusted with hostile approach of the government dissuading Congress help to drive home millions of migrant workers, a rattled Priyanka Gandhi made a last ditched effort in a tweet urging that “the state government should at least let the buses found fit by it to enter the state.” “There were 879 such buses. UP government has crossed the limits of creating hurdles in an effort to help migrant workers stranded due to the coronavirus lockdown,” she blamed.

“If the Yogi Adityanath government wishes the Congress can put BJP banners on the buses, but they should be allowed to run,” she added. “If the issue of providing buses had not got muddled in politics, at least 92,000 migrants, who have been forced to walk on the roads without water and food, could have reached home safely,” Priyanka remarked after the deadline given to government expired.

Ultimately the high profile drama of political dominance resulted in a big fiasco after the irritated state machinery allegedly resorted to major crack down operations in different cities arresting many veteran Congress leaders along with their supporters who were doing relief operations. Congress leaders claimed to reach out to around 67 lakh stranded people. Food, snacks and jaggery were distributed on the highway at 40 places. Common kitchens were operating in 22 districts to help hapless migrants.

State Vice President West Zone, Shri Pankaj Malik told Tehelka that within two days, the Yogi government has filed dozens of cases against Congress leaders and workers in the entire state who were busy in extending help to disparate migrants who mainly evacuated from Gujarat, Delhi and Maharashtra to their ancestor homes in villages, mostly in the eastern Uttar Pradesh. “In this disaster we are serving the people. Day and night our workers are serving the poor, labourers, migrant brothers and sisters in these hours of distress. Our politics is to serve the poor who are real country makers. Congressmen are not afraid of false cases will not withdraw from public service. Serving the peoples is the true politics in this disaster,” He added.

The other opposition parties- Bahujan Samaj Party (BSP) and Samajwadi Party (SP) have maintained studious silence on the alleged crack down on Congress leaders and workers who tried to support migrant labourers. Initially Samajwadi Party workers tried to help poor during lockdown period but they too alleged hostile police interference resulted in closure of relief operation. After the gap of almost two months Akhilesh Yadav’s wife and former MP Dimple Yadav distributed food packets and fruits to migrant workers on Agra-Lucknow Expressway who were being transported in a bus to their destination.

BSP supremo Mayawati looked jittery over the prospects of Congress revival as the oldest political party is facing exile from the power in the state since 1989 and trying to bounce back to power under the young leadership of Priyanka Gandhi. Mayawati in a series of twitter post termed the Congress party efforts as “Political drama.” CLP leader Aradhna Mishra retaliated on her tweets saying, “Mayawatiji is acting as a spokesperson for the ruling BJP for the obvious compulsions haunting her for the last many years.”

The political analysts feel that the oldest political party with Priyanka Gandhi Vadra at the helms of affairs in the state appears to have marginalised the mightier regional parties, SP and BSP, to fill the vacuum of opposition politics. With the aggressive posture over migrant labourers, the Congress is targeting regain its lost traditional base of working classes to sidestep cycle and the jumbo in the marathon for 2022. “At a time when crisis of migrant labourers triggered panic situation, the opposition parties SP and BSP have opted to be out of scene while the Congress to a great extent has been successful in building a political campaign on the plight of the migrant labourers,” they opined.

The Congress party is planning to challenge state action of slapping criminal cases against its leaders in the High Court. Let’s see how political developments would unfold in coming days as Uttar Pradesh will remain politically hotspot after such a big demographical change due to unexpected migration and growing unemployment. 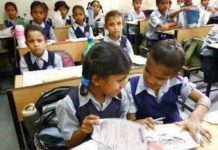