More than 10 persons were detained by the police when they were on their way to hoisting the new flag.

On October 31, Kalyana Karnataka member Vinod Kumar reportedly said, “We will hoist a new Karnataka flag on Kannada Rajyotsava. We are demanding a separate state for the North Karnataka region comprising of six districts as there has been no development in this part of the state.”

The group organized the protest and hoisted the new Karnataka flag on the Kannada Rajyotsava Day or the Karnataka foundation day which is celebrated all across the state on November 1 marking the formation of the state in 1956. 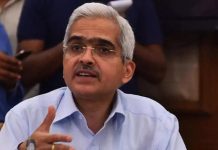