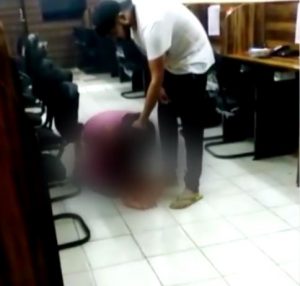 A Delhi police officer’s son named Rohit Singh Tomar was arrested on September 14 and charged with rape and criminal intimidation in two separate cases. The arrest was made following an FIR lodged on the basis of a complaint by the victim.

Singh while expressing concern tweeted, “I have taken note of a video where a youth has been seen severely beating a woman. I have spoken to the Delhi Police Commissioner over the phone and directed him to take necessary action in this regard.”

The home minister swung into action after seeing a video of a young man mercilessly beating a woman inside office premises went viral. In the video clip, young man is seen dragging the woman around by her hair, throwing her to the ground, kicking her, slapping her and using his knees and elbows to try and inflict maximum pain.

The woman, seen in the video, told the police that the accused, Tomar, called her to his friend’s office in Uttam Nagar and sexually assaulted her, said Anto Alphonse, Deputy Commissioner of Police (Dwarka).

The woman alleged that the accused started beating her when she told him that she will register a complaint with the police, he added.

The clip, believed to have been filmed at a call centre in Delhi’s Uttam Nagar on September 2.