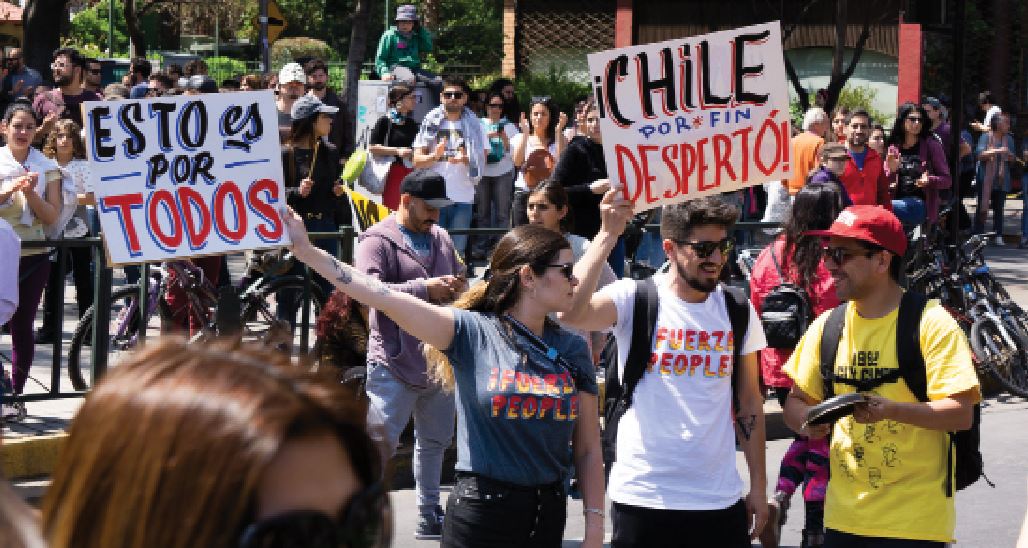 Democracy is asserted in Chile, but crushed in Myanmar. The people of Chile may thank their destiny that China is not their neighbour and the US under Biden is opposed to any repression against democracy

It may be asked what is common between Chile and Myanmar (Burma). The only answer is that the two countries, though separated by more than 18,000 kilometers, have been struggling for democracy for more than half-a-century. For Indians, Chile may be a remote country in Latin America, but our need for copper is met from this far-off country. It is one of the most prosperous countries of Latin America, but like Myanmar, the people’s aspirations for democracy continue to be elusive. The social inequalities are much pronounced, and the armed forces have created a rich class, which has received set back in the recently held election for the constituent assembly.

Myanmar, one of the most prominent South Asian regions, having long border with India, too is blessed with rich minerals and forest resources, has been suffering prolonged political instability, since its independence in 1947. Under the British Empire, the rulers of both the countries were exiled. India’s last Mughal Emperor, Bahadur Shah Zafar, was exiled to Rangoon (Yangon), and Burma’s last ruler was forced to surrender and sent to Ratnagiri. During the freedom struggle and also in later years, the close bonds between the two countries further cemented. However, in spite of close traditional ethnic ties, religious bonding and common political and democratic perception, in recent years, the bonding between the two nations appear to have diluted in recent years. India has not been able to give substantial support to Myanmar’s democratic movements.

The ordeal of Chile and Myanmar could be attributed to the interference of the powerful countries of the region. The American interferences in the Chilean affairs date back to the period 1812-1826, but India never directly or indirectly interfered in the political affairs in Myanmar. Since 1962, the first military coup, when Myanmar’s first Prime Minister, U Nu, was deposed, the country could not script a strong democratic structure. The military leadership, though appreciated India’s support in the field of health, education and infrastructure, preferred the totalitarian regime of the Communist China. The Chinese support to the repression unleashed by the armed forces against its people needs to be condemned, but both the government and India’s civil society is quiet and has adopted the approach of an ostrich.

The people of Chile may thank their destiny that China is not their neighbour, and USA under President Joe Biden is opposed to any repression against democracy. The people in Chile have overwhelmingly voted against the established political outfits having the support of the military during the recently held polls; in Myanmar, the armed forces rejected the massive mandate obtained by its charismatic leader, Aung San Suu Kyi, and clamped martial law since February this year. She has been put behind the bar and the people are being crushed under the boots of the uniform.

Earlier, the American intelligence agency, the CIA, has been interfering in the domestic affairs of Chile. In the world affairs, China, which is increasingly asserting for a super power status, is replicating the role of CIA in the 21st century. If the Americans were suspicious of the leftist organizations, China’s opposition towards democracy is well-known from Hong Kong to Pakistan.

After almost two decades of the junta regime,  Aung San Suu Kyi was allowed to establish a representative government. During her prolonged detention, she had suffered a number of personal tragedies, but she declined to be browbeaten. For this she was the most legitimate recipient of the Nobel Peace Prize. In Chile, Pablo Neruda, the irrepressible poet, a diplomat and activist too has been honoured with Nobel Prize. He was eliminated during his house arrest by injecting poison to him. Earlier, the CIA manipulated the ouster of the army chief, and then got the civilian government ousted by an army coup in 1973. It continued till March 11, 1990.

In Myanmar, China is doing what the Americans did in the Latin American country. Aung San Suu Kyi during her tenure in the government had never opposed China, but China never trusted her. It is to be watched whether the people’s mandate would be allowed in Chile, which has elected a new constituent assembly for drafting a new basic law. In Myanmar, the army’s political outfit was rejected, so in Chile too, the  rich ruling elite has been trounced in the mid-May poll held this year; or Chile too may have to face violence by the established power centres.

The India-Myanmar ties have always been very warm at the non-government levels. India’s north-eastern state, Nagaland and Mizoram, have strong ethnic ties with the people living on the borders. During the nineties, a large number of Chins had taken refuge in Mizoram. The inflow of the refugees has increased following the repression of the army against pro-democracy movement. The Mizoram chief minister, Zoram Thanga, has already asked for the Union Government’s support to the refugees taking shelter in India. However, the Union Government has asked all bordering states and paramilitary forces on the border to prevent the influx and deport those who have come in since the February coup in the neighbouring country.

The apathy of India towards the pro-democracy movements was visible in  2000, when the BJP government –led by Prime Minister  Atal Bihari Vajpeyee, had suddenly discontinued the pro-democracy broadcast of the All India Radio in Burmese language. Unfortunately, in spite many appeals from the Burmese intelligentsia, Vajpayee’s successor, Dr .Manmohan Singh, did not restore the broadcast. It is necessary to recall that the AIR broadcast was started with the help of the daughter of the first Burmese prime minister U Nu, Than Nu. During her stay in New Delhi, many Indian journalists and scholars could be able to understand the challenges of the governance in the neighbouring country.

Than Nu and her other two sisters, Cho Cho Kyaw Nyein and Nay Ye Ba Swe, who are admirers of India, are very popular in Myanmar. They are fondly called ‘three princesses’. The inability of the successive Indian governments, both the Congress and non-Congress regimes, have caused despair to the civil society in Myanmar.

Apart from Than Nu, who had stayed in India, Aung San Suu Kyi too has close ties with Indians. She was only two years old when her father, Aung San, was assassinated holding the cabinet meeting in Rangoon. She had schooling in India and had graduated from the Lady Shri Ram College, and later was also appointed a Fellow in the high-profile at the Indian Institute of Advanced Studies (IIAS) in Shimla. Aung San, who belonged to a middle class family, but his paternal grandmother was Daw Thu Sa, whose family traced their lineage from the royal family of the Pagan Kingdom through its last king. The British had deposed the last Burmese king Thinbaw . He along with his his queen, Supayalata, with two daughters, was exiled to Ratnagiri in India.  Earlier, India’s last Mughal Emperor, Bahadur Shah Zafar, was deposed in Delhi and exiled to Burma. Thus, there was a close affinity between the two countries during the Britsh subjugation. Earlier, the fathers of these two women of the most eminent families of Myanmar had befriended each other during their student life. If U Nu was quite close to Pundit Jawaharlal Nehru, Aung San was inspired by the Indian revolutionary group Forward Block of Subhas Chandra Bose. He had also met Mahatma Gandhi, when he attended the Ramgarh session of the Indian National Congress in 1940.

If Neruda’s is remembered as a great poet in India’s literary circles, Suu Kyi, has a large number of friends in New Delhi. It is, perhaps, desirable that like the Burmese tradition of the thwe thauk (“blood drinking”) ceremony, India too should join hands with the pro-democracy movements across the world. The governments may have their limitations, but the civil society should be more pro-active on this issue. In the two talk tradition, the participants collected their blood from a cut in their arms, mixing the participants, blood together in a silver bowl, and drinking it while pledging eternal comradeship and loyalty.  Indians, without being afraid of the contemporary totalitarian regime should reinvent her commitment to democracy and plural society. She must associate herself with the democratic movements across the globe, whether it is the Chile’s bold initiative for democracy or Myanmar’s struggle against the military junta.