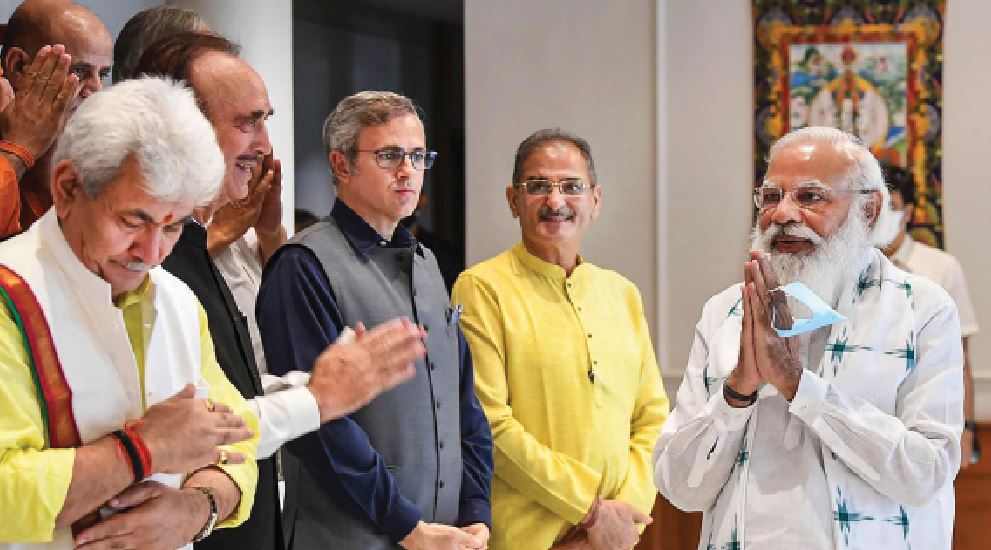 The meeting between Prime Minister Narendra Modi and fourteen J&K politicians on June 24 generated little excitement in Kashmir and for obvious reasons: it turned out little more than these leaders apprising the PM of their opinions. The PM and the home minister, in turn, hadn’t much to offer by way of resolution of their issues.

In his statement, the PM stressed expediting the delimitation exercise that is expected to enhance the seats of J&K assembly with more of these going to J&K’s Jammu division. To this end a delimitation commission has already been in place since the last over a year and it may soon complete its exercise.

The enhancement of the Assembly seats, the PM’s statement indicates, will be followed by holding of the elections in the union territory. Though the statement does not say it, the elections are hoped to be followed by the granting of statehood. And it is not clear whether this statehood would be full or truncated with real power vesting with the governor. So actually there is nothing concrete that has come out of this meeting. The centre has more or less stayed true to its ideological course on Kashmir.

In Kashmir, the run up to the meeting was marked by a hectic political activity. The leaders of the People’s Alliance for Gupkar Declaration met at the residence of the alliance’s chairman and National Conference chief Farooq Abdullah to decide their course of action. Earlier, the parties had held consultations within their own parties on Delhi’s outreach.

Speaking on behalf of the alliance, Abdullah said that Mehbooba Mufti, Mohammad Yusuf Tarigami and he himself would attend the meeting and present their position to the prime minister.

The meeting with the PM, as was already known, had no agenda. But the people in Kashmir generally expected the statehood, delimitation commission and the elections to be discussed. It seemed out of question that the centre would be willing to discuss the reversal of the withdrawal of Article 370 that granted J&K its special status under India’s constitution.

But most people seemed to agree that for now the return of the statehood would be a welcome step. People certainly want elections to take place and an elected government in power. It is now for over three years that the former state has been under a central rule. The people thus would want the elected representatives they could approach to resolve their issues.

As for Article 370, the only remote hope it could be reversed is if the Supreme Court overturns government move. But so far the court has not found time to hear the petitions challenging the revocation of J&K autonomy.

Be that as it may, the centre’s decision to call J&K political parties for a meeting is being seen in Kashmir as a welcome development. It is looked at as an opportunity to end the uncertainty of the last two years which has caused immense suffering to the people. More so, as it was chaired by the prime minister himself. The meeting may not immediately have found a solution to the current troubles of the union territory but it has certainly set in motion a process that could do so in the weeks and months to come.

Some observers in Kashmir are looking at the development as forced by the new geo-political imperatives. Over the last two years, the situation in India’s neighbourhood has transformed in many ways. The US is exiting Afghanistan paving the way for the takeover of Taliban sooner or later. This could deepen India’s security challenges. — one of these could be a spillover of violence into Kashmir as was the case during the second half of the nineties, when many Afghan militants had joined fighting in the state. This is reason enough for India to try and stabilize the situation in Kashmir.

China is in Ladakh over the last year. The communist giant has staged incursions at five points along the Line of Control. Last year, 20 Indian soldiers were killed in a skirmish with People’s Liberation Army which also lost four of its soldiers. The new conflict with China and a long running antagonism with Pakistan has created “a two-front situation” for India.

New Delhi has sought to address this difficult state of affairs by engaging Pakistan and Islamabad so far has played along. A back-channel dialogue is reportedly going on between them since December last year. In February, the neighbours re-affirmed the 2003 ceasefire agreement along the Line of Control. Pakistan seeks reversal of Article 370 move for the dialogue between the two countries to begin. Short of that Pakistan has shown itself inclined to accept full statehood for J&K along with protection for the former state’s demographic composition and the land rights of its people. The neighbours have been working on confidence building measures to take the process forward. And Islamabad wants most of these CBMs to be focussed on Kashmir. It’s waiting for India to make some concessions on this. But the PM’s meeting with J&K leaders has not satisfied Islamabad.

Pakistan foreign minister Shah Mahmood Qureshi termed the meeting as a futile public relations exercise that, according to him, has failed to achieve its objectives. “Yesterday’s meeting achieved nothing. In my view it was a drama that can at the best be called as a public relations exercise that yielded nothing,” Foreign Minister Shah Mahmood Qureshi said at a media conference.

As is apparent, Islamabad is unlikely to countenance the delayed statehood for J&K, nor would a powerless statehood be acceptable to it. Where does this leave the ongoing thaw between the neighbours? For now, in an uncertain territory. The dialogue could fall apart if the situation in Kashmir remains unchanged.

But as the June 24 meeting made it clear, India doesn’t seem to be bothered. It is loathe to bargain on the reversal of Article 370 move, nor is it inclined towards a rushed return of statehood to J&K. The BJP government at the centre seems set to fulfill its agenda in J&K in the shortest period possible — and which is to reduce the political weight of the Valley in a future J&K government and set in motion a process of demographic change. Whether the growing challenges in Kashmir, the geo-political pressures and talks with Pakistan would force the centre to change its tack, only time will tell. And for now, the fingers in Kashmir are crossed. “Whatever the motivations for the current outreach, it is a welcome initiative,” an editorial in Kashmir Observer read. “Much more so, for Kashmiris who have not only been the victims of the lingering conflict between the two neighbours but have also immensely suffered during the uncertainty of the last two years”. 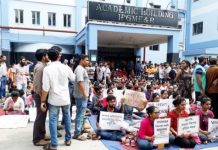