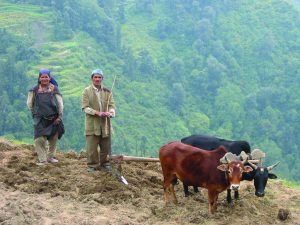 The farmers in Himachal Pradesh, who battle every year with hail storms, cloud bursts, excess and deficit snow fall and other weather vagaries, had high hopes from the Pradhan Mantri Fasal Bima Yojna (PMFBY), which was rolled out in January 2016. Three years down the line, they are disillusioned with the outcome.

Ambiguities in the scheme, lack of coordination among different implementing agencies (Insurance companies, banks and government officials) and rejection of claims on frivolous grounds has undermined the initial enthusiasm of the farmers for the scheme. The sources in the banking sector in the state have confirmed that even the loanee farmers are reluctant to seek insurance cover provided under PMFBY as they get only a pittance as crop insurance .

Like many other farmers, Chet Ram, a resident of Thanedar, a hinterland in district Shimla, got his apple crop insured in 2016. The crop failed due to bad weather but all the farmers of his village were proclaimed as not eligible for the insurance cover by the concerned insurance company.

The effected farmers approached the officials of the insurance company in Chandigarh to understand the reason for this denial. They learnt that the monitoring station having the instrument to record weather was installed in Narkanda at a height of 9000 feet, whereas it was initially decided to be installed at a height of 6500 feet. As a result of change in location of monitoring station, the weather conditions for the apple crop were normal and claims of all 400 farmers of the village were disqualified.

The united farmers did not lose hope and lodged a complaint with the concerned department in state government, but of no avail. “The officials gave us a cold shoulder and advised us to move the court, for which we have neither resources nor time. So we decided to desist from the insurance cover from next season so that we could at least save our funds drained in premium”, told Chet Ram. Most of the farmers in Himachal Pradesh shared the same experience with the crop insurance scheme launched with much fanfare across India.

During the year 2018-19, only one company, Agriculture Insurance Company of India was assigned the task of PMFBY in the state. Prior to this, SBI General Insurance, IFFCO Tokio, ICICI General   Insurance, Reliance Insurance also provided crop insurance cover to the farmers under PMFBY.

Himachal Pradesh has approximately 8 lakh farmers out of that about 4.31 lakh are credit linked.  The state has 464254 orchardists in the state. There was a great enthusiasm among farmers when PMFBY was launched but it started weaning soon when the farmers realized that the scheme was launched without the necessary groundwork and the insurance companies were making most of the profit at the cost of farmers. The table given as below provides a clear picture about the lacklustre progress of PMFBY in Himachal Pradesh .

Though it is mandatory for the loanee farmers or the Kisan Credit Card (KCC) holders to avail the crop insurance cover under PMFBY yet farmers have been taking exemption from this scheme. The bankers apprised that the farmers are apathetic towards the scheme and refuse to take insurance cover. Many of those who took crop insurance initially, have withdrawn. This is also indicative in the dwindling number of farmers opting for PMFBY (as shown in the table). The farmers are disgruntled over the half-hearted
implementation of the scheme.

Sources close to Tehelka apprised that 62.62 lakh apple trees have been covered in the state. The claims of only those farmers are settled whose claims are uploaded on the bank portal.
Uploading data  is a tedious task because in hilly areas internet connectivity and speed are major issues. The disruptions in connectivity and fluctuations in speed of internet connection hamper the process of uploading the data.

This leads to delays and farmers are unable to get the compensation, told a banker.  Besides this, uploading data is time consuming. The data is compiled by the insurance companies and provided to banks. The respective banks have to upload it on their portal. Bank officials are not trained in this and face technical glitches.

The topography of hilly area also restricts the scope of crop insurance as hail may occur on one hill destroying the entire crop while the other hill in the same village may remain completely unaffected by it. Since village/block is the unit reckoned for the insurance, farmers incur different degrees of losses and remain ineligible for the insurance claim.

An apple grower and former Vice Chairman of HPMC, Prakash Thakur told that farmers have to pay an extra premium for insurance against hailstorm. The apple orchards are spread in an area of 2000-3000 feet in hilly areas. The monitoring stations are sparsely located, thus unable to give coverage to all those who are insured.  Moreover, the insurance players install these stations according to their own suitability. The officials of insurance companies are not accessible. So this scheme has lost its sheen in a short period.

Himachal Pradesh is divided into four agro-climatic zones; (i) Shivalik hills, (ii) Mid hills, (iii) High hills and (iv) Cold Dry zone. The major crops grown are apple, wheat, barley, seed potato, peas, black gram, ginger, beans, maize and vegetables. Apple is grown extensively in mid, high and cold dry zones and is high susceptible to fluctuations in weather. In Shivalik hills, wheat, maize paddy, gram and potatoes are grown. This region has 30 per cent of the total geographical area of the state. The farmers in this region informed that they lose crops to stray cattle and do not get indemnity for this.

The landscape of Himachal like any other state of India is dominated by the marginal landholdings (below 1 hectare). About 68.17 per cent of farmers fall in this category. Small farmers (1ha-2ha)  own 18.7 per cent of total landholdings, followed by Semi-medium (2 ha-4ha) who own 9 per cent, medium farmers (4 ha-10ha) having 3.41 per cent and large farmers (above 10 ha) having 0.48 per cent of land holdings in the state.

The state has a high literacy rate of 83.78 per cent and farmers are aware as compared to many other states of India. But as far as the fruits of PMFBY are concerned, these have not been equally distributed in the state. Neki Ram, a marginal farmer from district Solan lamented that the farmers get insurance cover in the villages where the number of beneficiaries is small. In bigger villages, with larger number of beneficiaries, the insurance companies refrain from providing benefit to farmers on various technical grounds.

The farmers in Himachal have their own set of problems which are different from those being faced by their peers in other parts of India. The labour cost in the last few years has escalated to 400-600 a day for digging, plucking and other jobs. The apple growers have to resort to anti-hail nets to save the crop from hail storms. The new varieties of apples entail more expenditure in the form of use of fungicides. The farm gate prices of most of the horticulture crops have remained stagnant whereas the retail prices have skyrocketed in the last few years. Thus, the schemes like PMFBY need to be executed with right intention and clear direction to boost the income of farmers of this hill state.

The prolonged winter this year may not be good for vegetables grown in Shivalik hills and mid-hills but is conducive for better apple crop. According to Prakash Thakur, an apple grower near Shimla, the longer duration of snow fall has helped meet the chilling requirement for apple crop and locked in adequate moisture. If the weather remains cold during the flowering it may be harmful but that is unlikely.

At the same time, vegetable growers are worried as they may lose crop if the cold wave continues in the state for longer time.

‘PM Modi told us nothing will happen days before Article 370...