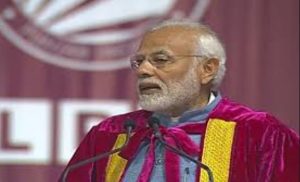 Reflecting on the theme of the event this year – ‘Future India: Science and Technology’ – Modi said that India’s true strength will be in connecting its science, technology and innovation, with its people.

Modi recalled the great Indian scientists of the past, including Acharyas J.C. Bose, C.V. Raman, Meghnad Saha, and S.N. Bose, and said that they served the people through “minimum resources” and “maximum struggle.”

“The life and works of hundreds of Indian Scientists are a compelling testament of integration of deep fundamental insights with technology development and nation-building.  It is through our modern temples of science that India is transforming its present and working to secure its future,” the Prime Minister said.

The Prime Minister emphasized that the pursuit of science is fulfilled through the achievement of two objectives: generation of profound or disruptive knowledge; and use of that knowledge for socio-economic good.

As we boost our discovery science ecosystem, we must also focus on innovation and start-ups, the Prime Minister said. He said that the Government has launched the Atal Innovation Mission to promote innovation among our scientists. More Technology Business Incubators have been established in the last four years than in the forty years before that, he added.

“Our Scientists must commit themselves to addressing problems of affordable healthcare, housing, clean air, water and energy, agricultural productivity and food processing. While Science is universal, technology must be local for providing solutions relevant to local needs and conditions,” Modi said.

The Prime Minister said that big data analysis, artificial intelligence, block-chain etc should be utilised in the agricultural sector, especially to help the farmers with relatively small farm-holdings.

He urged the scientists to work towards ease of living for the people. In this context, he mentioned issues such as drought management in low rainfall areas; early disaster warning systems; tackling malnutrition; tackling diseases among children such as encephalitis; clean energy; clean drinking water; and cyber security. He called for time-bound solutions through research, in these areas.

The Prime Minister mentioned major achievements of Indian science in 2018, including:

He said, “We need strong path-ways to commercialisation, that leverage our Research & Development achievements, through industrial products. The future is about convergence and connected technologies. We should catalyse, harness and manage change for the nation’s prosperity.”

The Prime Minister called for research, which is a fusion of Arts and Humanities, Social Science, Science and Technology.

“Our strengths in R&D are built on the backbone of our national laboratories, central universities, IIT, IISc, TIFR & IISER. However, over 95% of our students go to state universities & colleges. A strong research ecosystem must be developed in these Universities & Colleges,” the Prime Minister said.

Speaking on achievements in the space sector, the Prime Minister mentioned the success of Cartosat 2 and other satellites. He said preparations are underway for sending three Indians into space, through the Gaganyaan in 2022. He expressed happiness that research has begun to find an effective solution for sickle cell anaemia.

“We have launched the ‘Prime Minister’s Research Fellows’ Scheme under which, a thousand bright minds from the best Institutions in the country will be offered direct admission in Ph.D. Programs in IITs and IISc,” the Prime Minister said. 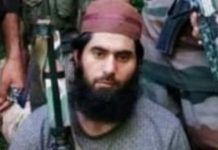