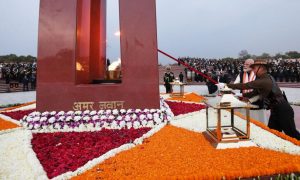 Earlier, addressing a large rally of Ex-Servicemen, Modi said that it is the result of the valour and dedication of lakhs of soldiers that the Indian Army is today considered among the strongest in the world.

He said that the soldiers have been the first line of defence, both against enemies, and against natural disasters.

Modi recalled the CRPF jawans who sacrificed their lives in the recent terror attack in Pulwama, and paid homage to all the martyrs who made the supreme sacrifice, defending India. He said that today New India is growing in stature globally, and this is due in large measure to its Armed Forces. He expressed happiness that the National War Memorial, or Rashtriya Samar Smaarak, is being dedicated today.

Modi recalled that the Union Government had also fulfilled its pledge of providing One Rank, One Pension to the soldiers and ex-servicemen and said OROP has resulted in an increase in pension of upto 40 percent, and an increase in salaries of soldiers of upto 55 percent, compared to 2014.

Giving some more illustrations of the Government’s approach towards the Armed Forces. Modi mentioned the encouragement being given to innovations by soldiers during Army Day, Navy Day and Air Force Day events. He also mentioned the Gallantry Awards Portal launched on 15 August 2017. He said women have now got the opportunity to become fighter pilots.

Modi said that change has been initiated in the entire ecosystem of defence procurement. He said transparency and level playing field are the hallmarks of the Government’s approach. He stressed on the encouragement being given to “Make in India.”

Referring to the long-pending demand from the Indian Army for 1.86 lakh bullet-proof jackets, Modi said the Union Government has procured over 2.30 lakh bullet-proof jackets over the last four and a half years. He said the Union Government is equipping the Indian Army with modern aircraft, helicopters, submarines, ships and weaponry and said decisions pending for a long time, are being taken in national interest.