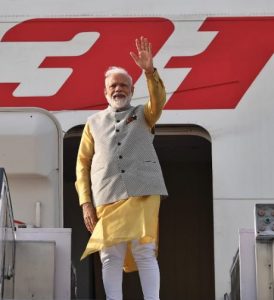 Prime Minister Narendra Modi on Thursday morning departed for Bishkek in Kyrgyzstan to attend the 19th Shanghai Cooperation Organisation (SCO) summit, which is being held from June 13 to June 14. He will take part in various multilateral programmes and also meet world leaders in separate bilateral meetings.

This is Modi’s first multilateral summit after he assumed office for the second term.

“PM @narendramodi leaves for Bishkek, where he will join the SCO Summit. He will take part in various multilateral programmes and also meet world leaders in separate bilateral meetings,” PMO said in a tweet.

“The SCO Summit will be followed by the bilateral component of the visit to Kyrgyz Republic on 14 June. PM Modi will have delegation-level talks with President Jeenbekov and jointly inaugurate the India-Kyrgyz Business Forum with Kyrgyz President,” Kumar added.

Meanwhile, Pakistan Prime Minister Imran Khan will also attend the summit. But no bilateral meetings have been scheduled between PM Modi and PM Khan, the Ministry of External Affairs had said.

Moreover, the ministry announced that Prime Minister Modi’s aircraft will not fly over Pakistan airspace to Bishkek and instead will take an alternative route.

Before embarking for Bishkek, PM Modi on Wednesday said in a tweet, “I shall join the meeting of the Council of Heads of State of the Shanghai Cooperation Organisation in Bishkek, on 13th and 14th June. We attach great importance to SCO and I look forward to a productive Summit.”

“After the SCO Summit, I shall be holding extensive talks with President Jeenbekov of the Kyrgyz Republic as a part of a bilateral visit. I will jointly address the first meeting of India-Kyrgyz Business Forum, an endeavour to promote commercial linkages between our nations,” Modi added.