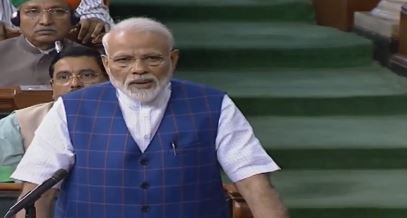 Speaking about the strong mandate of the 2019 Lok Sabha elections, PM Modi said that people of India have re-elected a stable government once again, after evaluating its performance.

“The 2019 Lok Sabha elections shows that the people of India are thinking about the good of the nation. This spirit is wonderful”, PM said. He added that it is satisfying to be given the opportunity to serve 130 crore Indians and do work that has made a positive difference in the lives of citizens.

Highlighting the vision of the Union Government, PM Modi said that the government believes in public welfare and modern infrastructure. He said that the government never diverted from the development path, nor diluted the development agenda. “It is important that the country progresses, every Indian is empowered and our nation has modern infrastructure,” Modi added.

He said that his government believes that each and every citizen has contributed towards India’s progress. He also reminded the House of the dark days following the imposition of Emergency.

Terming 150th anniversary of Mahatma Gandhi and 75 years of India’s independence as landmark occasions in the history of India, PM Modi urged everyone to observe these with great vigour. He said that the citizens of the country should strive to build the India, our freedom fighters dreamt of, and live for the nation.

On the importance of water conservation, Modi mentioned about the steps taken by the Union Government including the constitution of ‘Jal Shakti’ Ministry. He urged the people to take concrete steps to save water. He said that the water crisis affects the poor and women the most. He reiterated that the government is committed towards the task of bringing water to every household.

Modi asked for a collective endeavour to make India a five trillion-dollar economy. He added that promoting tourism and improving tourism infrastructure augurs well for economic prosperity. He also cited the importance of ’Make in India’ and skill development.

He asserted that there is no place for corruption in the nation and the government will continue its fight against corruption. He said that the government is committed towards ensuring Ease of Living for all its citizens and urged everyone to work towards creating a New India.

More than 100 dead in two days as lightning strikes UP,...