Prime Minister Narendra Modi, on Friday evening, will leave for Kerala to review the flood situation in the state.

“Had a telephone conversation with Kerala CM Shri Pinarayi Vijayan just now. We discussed the flood situation across the state and reviewed rescue operations. Later this evening, I will be heading to Kerala to take stock of the unfortunate situation due to flooding,” tweeted by PM Modi. 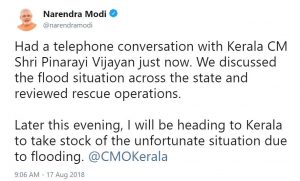 PM Modi had earlier on Thursday spoke to Kerala CM and discussed the flood situation in the state. He had also asked Defence Ministry to further step up the rescue and relief operations across the state.

Kerala is witnessing continuous rain since past few days, causing flood and landslides across the state.

More than 90 people have lost their lives so far. Rescue operations are in full fledge.

Thousands of people have been evacuated and are living in the relief camps.” 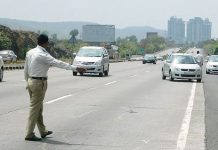