Prime Minister Narendra Modi will participate in the East Asia and RCEP summits in Bangkok today before he returns to Delhi tonight.

Prime Minister would be steering India’s negotiations at the Regional Comprehensive Economic Partnership or the RCEP.

PM Modi sought to dispel the notion that India is as reluctant to join the RCEP trade deal. In a detailed interview to Bangkok Post he said, India remains committed to a comprehensive and balanced outcome from the ongoing RCEP negotiations, but India would like a win-win outcome.

He added that addressing India’s concerns over unsustainable trade deficits is important.

Prime Minister expressed that a mutually beneficial RCEP, in which all sides gain reasonably, is in interests of India and of all partners in the negotiation. 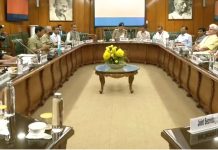