According to the officials, PM Modi will arrive at around 4.30pm.

Modi is likely to reach the rally venue at around 5 pm and after the 55-minute public address and meetings with senior party functionaries, he will return to New Delhi, an official said.

Elections to the Udhampur seat is scheduled on April 11 and for Jammu will be held on April 18. 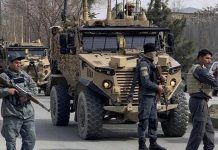