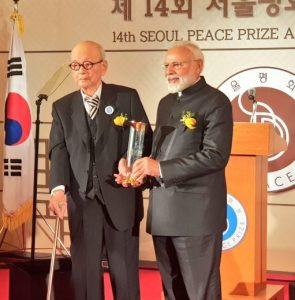 Prime Minister Narendra Modi on Friday received the prestigious Seoul Peace Prize for 2018 in recognition of his efforts in promoting global peace and harmony through inclusive economic growth and improving quality of life.

The award was presented to PM Modi by the Seoul Peace Prize Foundation at a grand ceremony. A short film on the life and achievements of Modi was also screened at the event.

PM Modi said that he is honoured to be awarded the Seoul Peace Prize. He believed that this award belongs not to him personally, but to the people of India.

“The Seoul Peace Prize is dedicated to the people of India & our country’s culture of peace and harmony,” PM Modi said after taking the award.

“I believe that this award belongs not to me personally, but to the people of India. The success that India has achieved in the last 5 years is due to aspirations, inspiration & efforts of the people of India. On their behalf, I accept the Award and express my gratitude,” Modi said.

“I dedicate this award to the 1.3 billion people of India for giving me the opportunity to serve them. I am honoured that this award is being conferred on me in the year that we celebrate the 150th Birth Anniversary of Mahatma Gandhi,” Modi added.

Modi further said, “The Seoul Peace Prize was established to commemorate the success of the 24th Summer Olympics held in Seoul in 1988. The games ended on Mahatma Gandhi’s birthday. The games showcased the best of Korean culture, warmth of Korean hospitality & success of the Korean economy.”